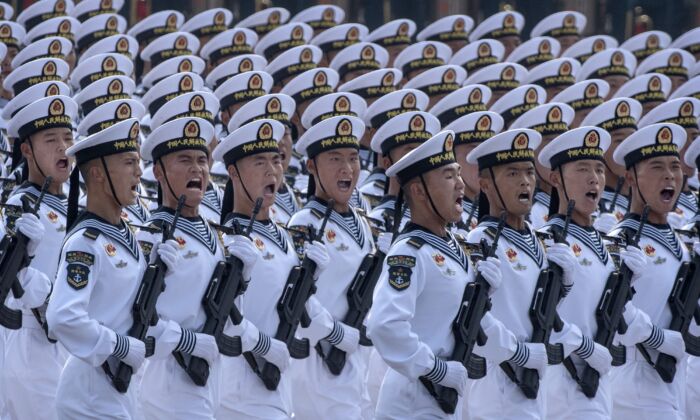 Chinese navy sailors march in formation during a parade to celebrate the 70th Anniversary of the founding of the Chinese communist regime at Tiananmen Square in 1949 in Beijing, China on October 1, 2019. (Kevin Frayer/Getty Images)
Australia

‘Groundless’: Cambodia Pans Reports of Chinese Naval Base on Its Shores

Cambodia’s foreign minister has rejected apparent “groundless accusations” that the Chinese regime is seeking to build a naval base on its shores—the second foreign naval base for Beijing.

Foreign Minister Prak Sokhonn told Australia’s Foreign Minister Penny Wong that Cambodian authorities would abide by its constitution that does not permit a foreign military base or presence on its soil.

“The renovation of the base served solely to strengthen the country’s naval capacities to protect its maritime integrity and combat crimes,” according to a statement on June 7.

“[Sokhonn] touched on the good gesture by Cambodian government in allowing the foreign military attaches in Phnom Penh to visit Ream Naval Base that is unprecedented in practice by any country vis-à-vis its military base.”

According to the Washington Post, two anonymous Western officials have revealed that the Chinese Communist Party (CCP) has been secretly building a naval facility on the southern coast of Cambodia, which faces the Gulf of Thailand.

The arrangement for Ream Naval Base would see Cambodia give Beijing exclusive access to a “portion” of the base.

The officials revealed that Beijing and Phnom Penh had gone to extraordinary lengths to conceal the presence of Chinese forces.

Apparently, foreign delegations were only allowed access to pre-approved locations, and during these visits, Chinese personnel wore uniforms similar to their Cambodian counterparts to avoid suspicion.

When U.S. dignitaries visited the site, their movements were heavily restricted.

This would be Beijing’s second foreign naval base with the first being in the East African country of Djibouti.

A presence in Cambodia would expand the influence of the Chinese People’s Liberation Army—Navy from the South China Sea, directly into the heart of South-East Asia.

News of the Cambodian presence comes after Beijing signed a security pact with the Solomon Islands in April that could pave the way for the CCP to station troops, weapons, and naval ships in the South Pacific region—just 1,700 kilometres from Australia’s northern city of Cairns.

Australian Prime Minister Anthony Albanese said on June 7 that it was “concerning” and that his government would speak with the Cambodians on the matter.

“We are in regular contact with the Cambodian government and we have been consistently assured that no foreign military will be granted exclusive access at Ream,” Albanese told reporters in Indonesia, the Australian Associated Press reported.

“We’ve been aware of Beijing’s activity at Ream for some time and we encourage Beijing to be transparent about its intent and to ensure its activities support regional security and stability,” he added.