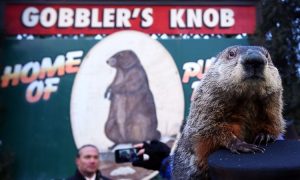 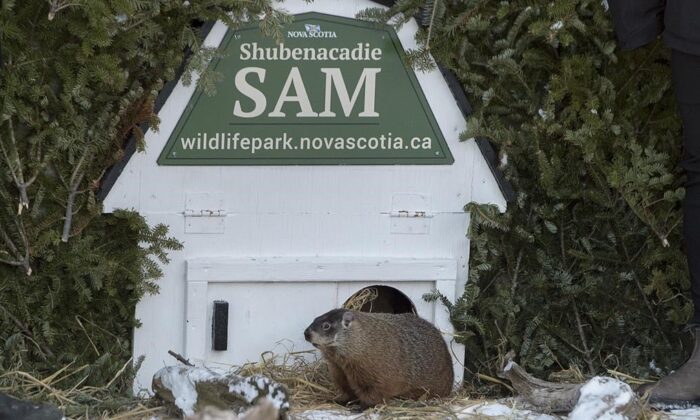 Shubenacadie Sam looks around after emerging from his burrow at the wildlife park in Shubenacadie, N.S. on Feb. 2, 2019. (Andrew Vaughan/The Canadian Press)
Canada

Groundhog Day Moves Online Across Canada as Precaution Against COVID-19

Nova Scotia’s most famous groundhog, Shubenacadie Sam, emerged from his pint-sized barn this morning and apparently failed to see his shadow.

According to folklore, if a groundhog doesn’t see his shadow on Groundhog Day, spring-like weather will soon arrive. However, if the pug-nosed critter spots his shadow, winter will drag on.

At exactly 8 a.m. local time, the door to Sam’s enclosure was opened, but the pudgy rodent refused to come out at first.

With a winter storm descending on the Maritimes overnight, there was a steady snowfall as Sam emerged from his den and waddled a few paces from the front door.

The annual tradition at the Shubenacadie Wildlife Park north of Halifax usually attracts scores of schoolchildren, but not this year. There were few onlookers today as the event was broadcast live on Facebook to comply with COVID-19 health protocols.

As usual, Shubenacadie Sam was the first groundhog in North America to make a prediction.

In Wiarton, Ont., the community’s famous albino groundhog, Wiarton Willie, was also expected to make an appearance without an in-person audience.

Folklorists say the Groundhog Day ritual may have something to do with Feb. 2 landing midway between winter solstice and spring equinox, but no one knows for sure.

In medieval Europe, farmers believed that if hedgehogs emerged from their burrows to catch insects, that was a sure sign of an early spring.

However, when Europeans settled in eastern North America, the groundhog was substituted for the hedgehog.

Janice Jackson, the mayor of Wiarton, Ont., says that the town in the South Bruce Peninsula has pivoted the celebration of its famous groundhog to a webcast this year.