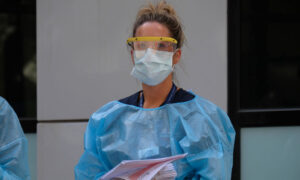 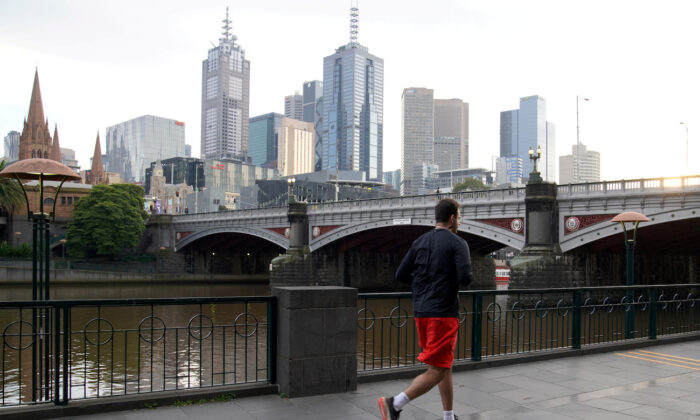 A man runs along a waterway amid lockdown restrictions in Melbourne, Australia, on July 10, 2020. (Sandra Sanders/Reuters)
Australia

The federal government, Melbourne Lord Mayor Sally Capp and Victorian business groups have hit out at another pause on easing COVID-19 restrictions, with some left feeling it’s Groundhog Day.

Premier Daniel Andrews opted to pause unveiling rule changes in metropolitan Melbourne on Oct 25 while awaiting the results for over 1000 tests linked to the growing northern suburbs outbreak.

Andrews insists Melbourne remains “on track” for its initial November 1 timeline, which would include a reopening of all retail stores as well as hospitality venues with density limits.

But his “cautious pause” sent political leaders and industry groups into a frenzy after the premier foreshadowed “significant” announcements throughout last week.

“Victoria’s public health systems are either up to the task of dealing with future outbreaks or they are not,” the statement read.

“The decision to keep businesses closed suggests that there is still not sufficient confidence within the government that their systems can support reopening.

“This is a profound disappointment.”

The City of Melbourne Mayor was also left “bitterly disappointed”, decrying the lack of certainty for hospitality and retail businesses in the city.

“Changing the goalposts is confidence shattering for businesses that are struggling to hold on,” Capp tweeted.

“Every day is critical to keeping Melburnians in jobs and saving businesses.”

While applauding minor rule changes for regional areas from 11.59pm on Tuesday, Victorian Chamber of Commerce and Industry chief executive Paul Guerra said the extended wait was a “shattering blow to businesses”.

“It’s like Groundhog Day, and has left businesses in limbo even though average case numbers are now below the government’s target for reopening,” he said.

“The delay announced today can only point to a lack of confidence in the efficacy of the contact tracing system and the ability of health officials to manage the COVID-19 crisis.”

That point was echoed by the Chapel Street Precinct which argued Melbourne should be ready to proceed if the state’s contact tracing system did its job properly.

“A minute longer closed is absolutely unacceptable given the data.”

“People are at a financial and mental breaking point,” she said.

“A pattern of delays, maybes and apologies doesn’t excuse Victoria’s failure to manage local outbreaks. It is taking too long and too much is being lost.”

“Today’s reversal is a shock and undermines any remaining confidence that the Victorian government knows what it is doing to open the state’s economy,” Willox said.