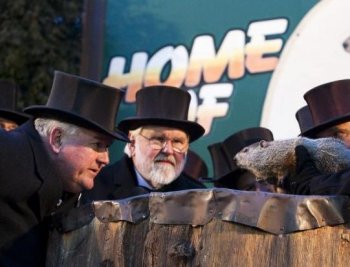 Punxsutawney Phil, the legendary rodent that foretells the weather every year on Groundhog Day, Feb. 2, will soon emerge from his burrow as the holiday approaches.

Before sunrise on Wednesday, Punxsutawney Phil will appear for the 125th time in the role of weather prognosticator. The ‘seer of seers’ will then predict the nature of winter’s end from a temporary burrow erected at Gobbler’s Knob, in a rural area about two miles east of Punxsutawney, Pa.

According to American folklore, if the weather is cloudy when Phil emerges from his burrow, he will leave the burrow, indicating that an early spring will arrive. But if it is sunny, the groundhog will see his shadow and go back into his burrow, signifying that winter will continue for six more weeks.

At last year’s celebration, Phil, surrounded by an estimated 15,000 people, predicted six more weeks of winter. Phil has only predicted an early spring 15 times since he started doing so in 1887.

“However silly it might be, this holiday has existed for years,” said Stephen Tobolowsky, an honorary member of the Punxsutawney Groundhog Club, during last year’s celebration. The Inner Circle is a group of local dignitaries who organize the event every year.

“You have to look at the longevity, and you have to say that there’s something to it,” Tobolowsky added. The Epoch Times did an in-depth interview with Stephen Tobolowsky last year.

Tobolowsky played the nerdy Ned Ryerson in the 1993 movie Groundhog Day, in which weatherman Phil Connors finds himself living the same day over and over again. He repeats the day until his character improves, from self-centered jerk to worthwhile man.

This year’s prognostication will take place at Gobbler’s Knob from 5:45 to 8:30 a.m. EST on Wednesday. The entire celebration started Saturday, Jan. 29 with a breakfast with Phil, and will end at noon on Feb. 2.