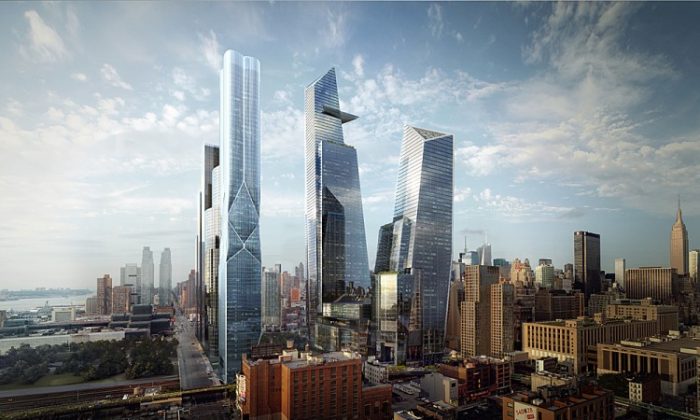 A rendering of what the new Hudson Yard center will look like once completed on New York City's West Side. (Courtesy of MIR)
US

Groundbreaking at Hudson Yards in NYC

Hudson Yards, the largest private development project in the country, will showcase what public–private partnerships can do to economically transform neighborhoods, and possibly provide a blueprint for future developments in the city’s outer boroughs.

“This is the future of New York,” said Mayor Michael Bloomberg from the Hudson Yards site Tuesday. “After years and years of planning and partnership, breaking ground on the first commercial building on the Hudson Yards is a wonderful thing.”

The former rail yard, owned by the MTA, stretches between 10th Avenue and the West Side Highway between 30th and 33rd streets in Manhattan. The 26-acre site will soon be home to residential and commercial spaces, a new public school, a luxury hotel, and the final stop once the expansion of the No. 7 subway line is complete.

“Hudson Yards is the defining development of the 21st century. We are now taking the renderings to reality,” said Stephen M. Ross, Related Companies founder and chairman. “There has never been a bigger challenge, honor, or responsibility.”

The groundbreaking at Hudson Yards was the culmination of years of hard work by parties in both the public and private sector. Investors had a vision: unlock the economic potential of the undeveloped 26-acre parcel of land, which was generating no revenue for the city.

Many had tried, but all had failed to break through the disagreements on different sticking points in the development.

Related Companies, the chief developer of the property, came in during the contentious debates in 2004 and 2005, and along with members of the City Council, community boards, and then-Deputy Mayor Dan Doctoroff, found common ground to work on.

While it was not always pretty, the unprecedented cooperation worked. “It will be a moment in the land use and governmental history of this City of New York, where people disagreed tremendously and passionately, and stayed in the very same room and kept working to get something done to make the city better,” New York City Council Speaker Christine Quinn said at the groundbreaking Tuesday.

he Hudson Yards development project—along with the rezoning of Chelsea for the construction of the High Line and Chelsea Market—was undertaken by Mayor Bloomberg and his administration as a way to bring economic vibrancy to a part of the city that had promise but needed a catalyst. It has been a project Bloomberg has worked on for nearly his entire three terms in office.

With a new mayor on the horizon, economic development projects like Hudson Yards are something business leaders would like to see continued with the next administration and expanded to outside of Manhattan.

On Nov. 28, business leaders met to discuss what strategies the next mayor should look at to continue the momentum the city has enjoyed during the Bloomberg administration.

“Most of the conversation has been such a happy discussion about how great things are going,” said Deborah Wright, chairman and CEO of Carver Bancorp Inc. while on the Opportunity Zones panel.
“But the reality is there is a whole swath of New York City that did not benefit from the last decade.”

Recently, Brooklyn has gained some momentum with development projects such as the Atlantic Terminal, Barclay’s Center, and the neighborhood of Williamsburg. But with 28.4 percent of those living in the Bronx below the poverty level, according to 2011 U.S. census data—compared to 14.2 percent overall in New York City—Wright believes they should add outer boroughs with the most needy communities to the conversation.

“We always think about Manhattan first but those opportunities exist in all of our boroughs,” Wright said. “We have to have a perspective that that is true and follow through on it.”

Wright wondered what could have been if the new Cornell Tech Campus to be built on Roosevelt Island had been put in the Bronx or Brooklyn instead. “If we invested in [the Bronx], just like we have in other parts of the city, I guarantee that job gap would close,” Wright said, referring to the Bronx’s higher unemployment rate.

Jeff Blau, CEO of Related Companies, also spoke on the panel last Wednesday. According to Blau, the Bronx had one of the lowest rates of retail square footage per spendable dollar.

Related Companies built the Bronx Terminal Market to help stimulate the economy. While it was not a monumental project such as Hudson Yards, it did provide local jobs and much needed retail space.

Blau seemed optimistic that, with help from the next city administration, progress in the outer boroughs is possible. “Even in the depressed markets, there are demands,” Blau said. “We can make things happen there.”