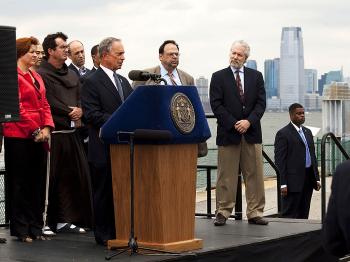 Epoch Times Staff
View profile
Follow
biggersmaller
Print
The Landmarks Preservation Commission voted against giving landmark status to a building near Ground Zero, clearing a major obstacle for it to become a mosque. The panel announced its vote at a press conference on Governor's Island, Tuesday afternoon.

The project, which is proposed by the Cordoba Initiative, has been at the center of a heated debate, and groups of protesters have gathered in front of the building to voice their opinions against the proposed mosque and community center. Many critics of the project say that building the mosque so close to the site where Islamic extremists carried out terrorist attacks on Sept. 11, 2001, is insensitive and disrespectful toward the families whose loved ones lost their lives.

However, Cordoba says that by building the $100 million building it seeks to foster good relations between the United States and the Islamic world. The project has been supported by several major New York politicians such as Mayor Michael Bloomberg, Manhattan Borough President Scott Stringer, and U.S. Rep. Jerrold Nadler.