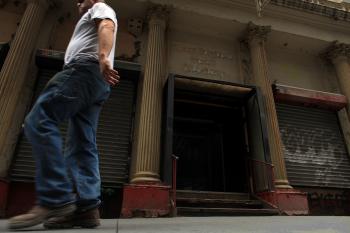 A man walks by the building which is poised to house the Cordoba Initiative Mosque and Cultural Center on August 16, 2010 in New York, New York. (Spencer Platt/Getty Images)
US

Annie Wu
Annie Wu joined the full-time staff at the Epoch Times in July 2014. That year, she won a first-place award from the New York Press Association for best spot news coverage. She is a graduate of Barnard College and the Columbia University Graduate School of Journalism.
View profile
Follow
biggersmaller
Print
NEW YORK—The proposed mosque near ground zero has officially become a national controversy. Senate Majority Leader Harry Reid voiced his opposition to the mosque on Monday striking a contrast to President Obama’s support for the mosque last Friday, which Obama himself has watered down.

"The 1st Amendment protects freedom of religion," Reid assistant Jim Manley said in a statement. "Sen. Reid respects that, but thinks that the mosque should be built someplace else."

Democratic representative from Louisiana Charlie Melancon also voiced his opposition to the mosque, according to Politico: “I support freedom of religion, but let’s give the families of 9/11 victims a voice about where this mosque should be placed because putting one near ground zero isn’t appropriate.”

At a White House dinner celebrating Ramadan last Friday, Obama initially said the freedoms enjoyed by Americans grants the right to Muslims to build a mosque near ground zero.

"Our founders understood that the best way to honor the place of faith in the lives of our people was to protect their freedom to practice religion," he said. “As a citizen, and as president, I believe that Muslims have the same right to practice their religion as everyone else in this country.”

The Cordoba Initiative said they are planning to build a 13-story, $100 million facility, which includes a worship center and a community center.
The president’s speech drew comments from both supporters and critics of the mosque.

“I was not commenting [on the building of the mosque] and I will not comment on the wisdom of making a decision to put a mosque there,” he said.
Instead, he stressed he was simply letting people know his thoughts. “In this country, we treat everybody equally and in accordance with the law, regardless of race, regardless of religion," Obama said, according to New York Daily News.

The president pointed out that terrorists do not respect religious freedom and al-Qaeda’s cause is not Islam, but a gross distortion of Islam.
“In fact, al-Qaeda has killed more Muslims than people of any other religion—and that list of victims includes innocent Muslims who were killed on 9/11,” he said.

The New York Daily News reported that support for Obama’s comments was strong on the city's streets while former House Speaker Newt Gingrich described the president as “profoundly wrong."

"There is no issue of religious liberty. He won't face truth," Gingrich wrote via his Twitter account.