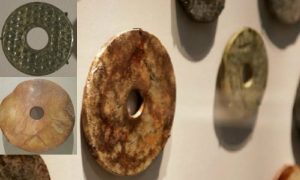 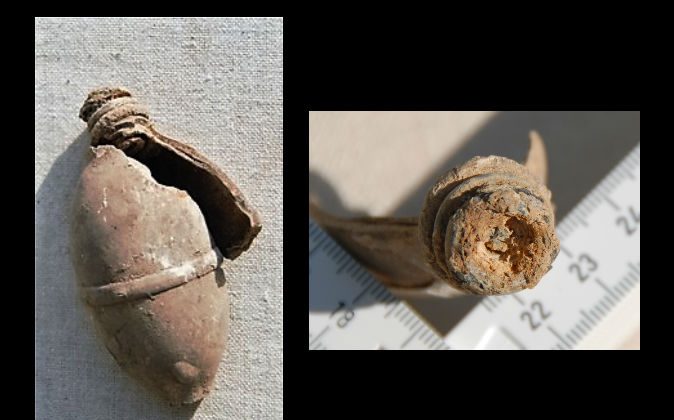 An artifact recovered from a hilltop site overlooking the Delaware River in Eastern Pennsylvania, along with other artifacts recovered during a 10-year investigation reveals there is much to be learned about the history of the region.

The white kaolin clay vessel serendipitously appeared one day in 2013 outside the entrance of a ground hog hole, according to the property owner and researcher, who wishes to remain anonymous. She has a professional background in art restoration, pottery, and pigments, and the type of clay and unique design features caught her attention as something atypical for the region.

She explained: “Kaolin clay is quartz-based and void of impurities, while Native American earthenware pottery used natural muds and pigments from their geographic vicinity. … Pottery of the Delaware Indians produced a darker ceramic that was filled with natural impurities, such as grass and stones.” Also, the vessel’s symmetrical shape may have been created in a mold, which differs from the coiling technique common to North American pottery.

Another significant differentiation between kaolin and earthenware pottery is that kaolin requires a much higher and consistent firing temperature (2400 degrees Fahrenheit) produced by a enclosed kiln, compared to the lower temperatures produced in the open pit wood firing method traditionally used by Native Americans.

It is believed the main section of the vessel may have been manufactured in a series of stages as suggested by the splaying of the layers and structural rings around the neck and midsection. Upon microscopic examination, it was seen that the top and bottom sections appear to be joined and sealed by the structural band around the midsection.

The first use of kaolin is credited to the ancient Chinese who, over the centuries, perfected it’s use in creating fine porcelains; kaolin is also known as China clay. By the 14th century, the highly desirable products were being imported into European markets.

The first use of kaolin is credited to the ancient Chinese.

What Was the Artifact’s Purpose?

The utilitarian purpose of the artifact remains confusing. A vessel with a stopper suggests it was used for the storage of a liquid or powder, however, the stopper has a hole extending through it, which narrows down possible uses.

Results from museum inquiries around the world and other research for similar clay vessels with a small hole in the stopper, and a midsection ring feature, has proved unsuccessful thus far. Somewhat similar examples were mostly described as perfume vessels and some examples as “Greek Fire” incendiary grenades. No artifacts even remotely similar were found from the colonial period of North America.

No artifacts even remotely similar were found from the colonial period of North America.

From appearances, it is impossible to differentiate between artifacts described as perfume containers versus grenades. Scientific literature on such sphero-conical vessels shows there is a continuing debate whether such vessels were for storing valuable liquids or if they had a military application. It can only be determined empirically through analysis of residue. This may be a possible future course for the owner, since it appears liquid has pooled and dehydrated in the vessel.

Until then, the owner remains curious and hopes that exposure of the artifact in the media will produce provenance information (Comments can be directed to www.precontact.org).

An elevated site above a river is a desirable place to settle regardless of the time period. The ceramic vessel and other unusual artifacts retrieved from the site makes one pause and consider the countless generations and cultural groups that called it home.