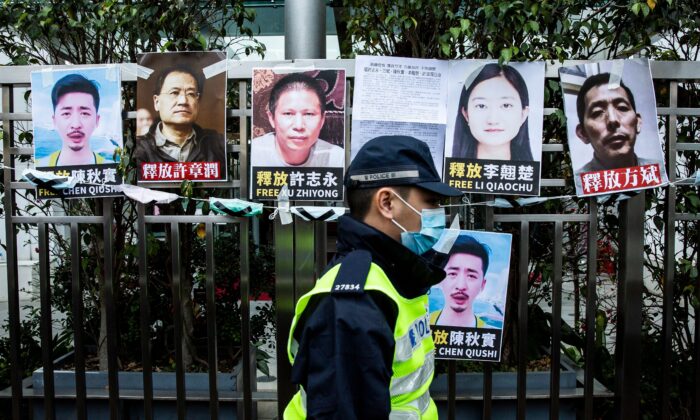 A police officer walks past placards of detained rights activists taped on the fence of the Chinese liaison office in Hong Kong on Feb. 19, 2020, in protest against Beijings detention of prominent anti-corruption activist Xu Zhiyong. Police in China have arrested Xu Zhiyong, a prominent anti-corruption activist who had been criticising President Xi Jinpings handling of the COVID-19 coronavirus. (Isaac Lawrence/AFP via Getty Images)
Viewpoints

First things first. We get through the pandemic, then we turn on one another and start assigning blame. Alternatively, since we’re already doing what we can on the former, we start drawing lessons now. And lesson one is: Would anything whatsoever make people in free countries stop trusting communism?

Apparently not. Che Guevara is still a fashion accessory despite Stalin, Pol Pot, Mao, and what’s-his-name in Cuba, the bearded tyrant whose brother took over because a sure sign of illegitimate regimes is atavistic reversion to dynastic rule.

No, no. No Trudeau cheap shots. He won a fair election even if some of us didn’t vote for him and aren’t sorry. But it is fair to critique his response to the pandemic, especially the early stuff about how experts did not recommend closing the border and xenophobes did. Oh, and the bit where his foreign minister just retweeted a self-congratulatory tweet from the Chinese embassy about how they’re helping us fight COVID-19.

Say, would that be the same Chinese government whose initial coverup played a major role in the disease spreading globally before we knew what was upon us? The one still holding two Canadians hostage in the hope of perverting our judicial system over Meng Wanzhou’s extradition? The one bullying us over trade? That just reciprocated for our early donation of 16 tonnes of now-badly-needed protective medical equipment with a possibly faulty shipment of the sort of gear the Dutch and Spanish have had to recall?

Remember, in the crucial early stages of COVID-19 our government refused to restrict flights from China to Canada, which their foreign ministry praised while lambasting Donald Trump for clamping down. A sentiment many Canadians echoed before our government panicked and reversed course. (As many liberal American politicians initially opposed social distancing lest it reflect bigotry.) To repeat, I’m no fan of Trump. But to prefer the Chinese Communist Party and Xi Jinping is Orwell’s grotesque failure in one’s sense of proportion.

It is tempting to suppose our government might at least be engaging in a base and unsuccessful attempt to buy the freedom of the “two Michaels” by grovelling here. But I fear it lacks even that shabby justification. It’s simply an inglorious instinct to lick the boots of the powerful.

Pardon me for repeating a quotation that plays in my mind every time someone applauds China’s rise at the expense of the United States. And since The Epoch Times quoted J.R.R. Tolkien in its March 31 newsletter I’m not embarrassed that it’s from the Lord of the Rings, specifically Saruman’s poisonous pitch to Gandalf: “A new power is rising. Against it the old allies and policies will not avail us at all. There is no hope left in Elves or dying Numenor. This then is one choice before you, before us. We may join with that Power. It would be wise, Gandalf. There is hope that way. Its victory is at hand; and there will be rich reward for those that aided it.”

Whether China is supplanting the United States economically, geopolitically, or ideologically is a factual question to be weighed dispassionately. But it has long appalled me that pundits who think it is happening seem to derive mordant satisfaction from seeing Uncle Sam put in his place without apparent regard for what a world dominated by Chinese Communist Party and Xi Jinping thought (or grim parody of same) would be like.

There are rich rewards for those who accommodate China and sometimes painful career consequences for those who do not, especially in international bodies. Which helps explain why it’s not just our government. The World Health Organization is deeply compromised by currying favour with China, including that bizarre episode where Bruce Aylward (coincidentally Canadian) tried to pretend Taiwan did not exist and that he could not hear a journalist asking about it. Even WHO was embarrassed by that one, but only because it became internationally notorious. Day in, day out, as China buys friends in international bodies, those who wish to prosper learn to read the signals from Beijing and bow down.

Still, material influence only goes so far. Many in our government will never get on the “trade promotion” gravy train, and this tendency to view China as a harmless cuddly panda and the United States as a big bad bully reaches far beyond the political and bureaucratic elite who might. Thus our government’s remarkable indifference to reports from intelligence agencies warning of China’s threat to Canada (including over our 5G network) is primarily driven, I suggest, by a widespread cultural incapacity to detect real threats from actual enemies and a corresponding tendency to detect imaginary ones from friends.

It happened with Hitler in the 1930s. And from the 1960s through the 1980s the cool politicians, journalists, academics and celebrities said the United States was trying to swallow Canada whole and called the reptilian Leonid Brezhnev a man of peace. Just as today Western experts and media outlets often accept Chinese claims about stopping the pandemic dead even while reporting that free societies have many undetected cases because of asymptomatic transmission. I just got a tweet from a colleague who is no fool sharing a graph in which the democracies are floundering and China gets a big “Success!” (as does, far more plausibly, South Korea).

Yeah. Success for propaganda. But Russia’s numbers were lies and so are China’s. And speaking of lies, why aren’t people, including our foreign minister and prime minister, openly offended by China’s crude disinformatsia campaigns about the virus coming from the American military? Especially when we’re all meant to be pulling together, exhibiting openness, and dropping the usual nasty political rhetoric. Unless you’re a communist tyranny, that is.

One is sometimes tempted to despair by the blindness to foreign perils of those Westerners who ought to be most appreciative of the blessings of liberty. After reading “How Democracies Perish” by Jean-Francois Revel in 1985, I almost decided the victory of the Soviet Union would serve us right for being so supine and stupid. But of course, the Soviet Union did not win; it collapsed from its own internal contradictions and because free inquiry does get at the truth eventually.

So I believe will China, with or without some reckoning for our Sarumans and Wormtongues. At any rate, as The Epoch Times quoted Gandalf on Monday, we do not wish for evil times to come upon us, but it is not given us to decide. “All we have to decide is what to do with the time that is given us.”

I will spend mine telling the truth, and reproaching those who parrot lies on my behalf.