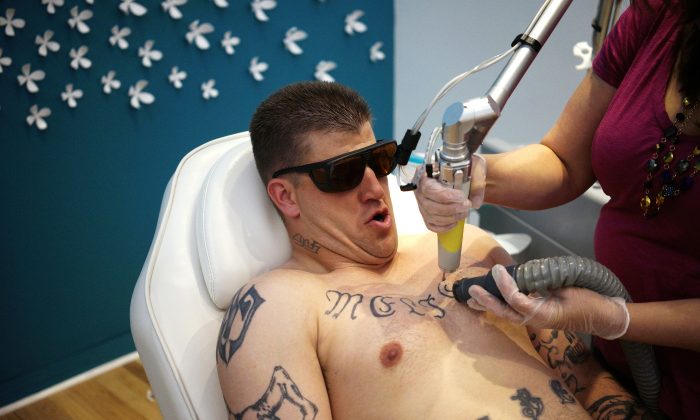 A man has a tattoo of his ex-wife's name removed from his chest at a clinic named What Were You Inking in Denver, Colorado, on April 18, 2014. (REUTERS/Rick Wilking)
US News

State Sen. John Ruckelshaus said some people have called his proposed legislation “the grossest bill of the session.”

But Ruckelshaus, R-Indianapolis, just wants to be “proactive” in banning scleral tattooing, he said.

“You only have one shot at eyesight,” Ruckelshaus said.

Scleral tattooing involves permanently changing the color of the white part of the eye by using a tool such as a needle to fill in and color it with a pigment, he said.

The state Senate recently approved the measure on a 42-5 vote. It heads to the Indiana House for further consideration.

Oklahoma’s legislature banned scleral tattooing a few years ago, and Ruckelshaus said that’s what he based his on.

“I think it was important because when you do bills like this, yes, you set public policy, but you also draw awareness to it,” Ruckelshaus said.

Dr. Eugene Helveston, professor emeritus of ophthalmology at the Indiana School of Medicine, testified before a Senate committee about the serious vision problems the procedure can cause.

“You run the risk of infection and ultimately losing the eye,” Ruckelshaus said.

The person credited with creating the practice, a tattoo artist that goes by the name Luna Cobra, Helveston said.

“I think it absolutely should be done away with and not be allowed,” Helveston said.

Helveston and Ruckelshaus both said they were not aware of any cases of scleral tattooing in Indiana, and employees at Ink or Swim, a tattoo and piercing shop in Valparaiso, said they haven’t, either.

“We’ve never had someone ask for it,” Kerri Kello, co-owner of Ink or Swim Tattoo, said.

Kello and one of her tattoo artists, Caela Rae, said it shouldn’t even technically be classified as a tattoo.

“With tattooing, you’re creating art on skin, whereas this is more dying or adding pigment to the whites of the eyes,” Kello said.

Rather than using typical tattooing equipment, scleral tattooing injects a pigment into the eye, they said.

“It’s totally different because we’re not injecting ink into anybody,” Kello said.

Just as there aren’t many people who seek getting their eyeballs dyed, Rae said she doesn’t know of any artists who would want to do it.

“Even the piercers that I know that are heavy into body modification, like scarification and things like that, they’re like, no, I’m not even going to touch that because the risk is really high,” Rae said.

Emilio Saylor, another tattoo artist at Ink or Swim, and his two co-workers agree, though, that doesn’t mean it should necessarily be banned.

Unless scleral tattooing becomes a definite problem, “I feel like it’s almost pointless to ban it when no one around here does it,” Rae said.

“If it were an issue and people were going blind, like several people a year were going blind because of this, I’d say yeah, maybe it should be looked at differently or maybe some other sort of regulations,” Rae said.

With something as risky as scleral tattooing, Kello, Rae and Saylor emphasized it should only be done by someone trained and educated on how to do it properly.

“I think people who don’t know what they’re doing definitely shouldn’t be doing it,” Rae said.