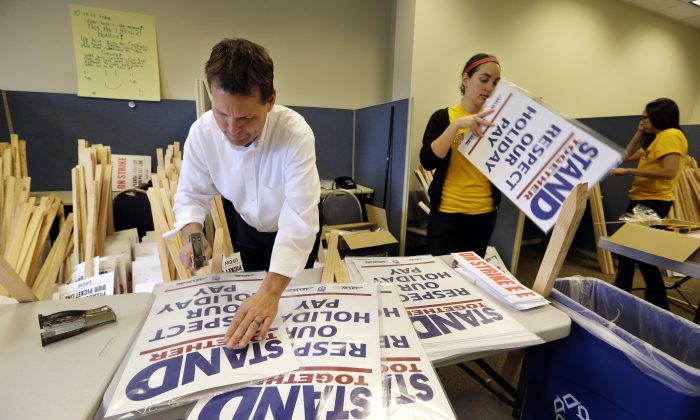 United Food and Commercial Worker union employees Tim Phelan, left, and Nicki Olivier assemble picket signs at a local headquarters Monday, Oct. 21, 2013, in Seattle. Union leaders for about 21,000 workers at four major grocery store chains in the Puget Sound area erre threatening a strike at 7 p.m. Monday before a agreement on a labor contract was reached with employers. (AP Photo/Elaine Thompson)
US

The looming grocery strike in Seattle appears to have been averted after the grocery worker unions said on Monday afternoon that they have reached a tentative agreement with the national grocery chains.

“This tentative agreement has been unanimously recommended by the union member bargaining team,” the bargaining unit said via Facebook. “Details will not to be released until after union members themselves have had the opportunity to review the tentative agreement and vote on it. The times and locations of those vote meetings will be announced in the coming days after arrangements have been made to schedule the votes.”

According to union members commenting on the post, that means that there is no need to strike.

Union leaders for about 21,000 workers at four major grocery store chains in Washington, in the Puget Sound Area, had been threatening to strike at 7 p.m. unless a labor contract agreement was made.

Unresolved issues include wages, holiday pay and cuts to health care benefits. The two sides have been in talks for more than six months.