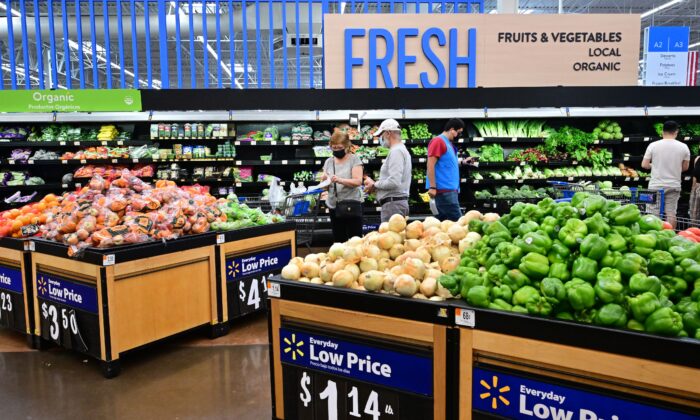 People shop for produce at a store in Rosemead, Calif., on June 28, 2022. (Frederic J. Brown/AFP via Getty Images)
Inflation

While the annual pace of inflation in the United States eased slightly in July, a deeper dive into the numbers reveals that some of the categories that hit everyday Americans especially hard in the pocketbook have soared, with the price of groceries jumping to the highest level since 1979.

The Bureau of Labor Statistics (BLS) reported on Aug. 10 that the headline pace of inflation, as reflected in the Consumer Price Index (CPI) ticked down from a recent peak of 9.1 percent in June to 8.5 percent in July.

The month-over-month CPI inflation figure came in at 0 percent, meaning the overall pace of price growth stayed flat between June and July, prompting President Joe Biden to take a victory lap saying that the “economy had zero percent inflation in the month of July.”

Republicans and some economists objected to the White House messaging on “zero” inflation by arguing that Biden was cherry picking the data by focusing on the 0 percent month-over-month pace of growth, while overlooking that the year-over-year rate of inflation—which tends to be the more commonly reported figure—remained at an eye-watering 8.5 percent.

“It’s a bogus math trick. This is the overall one-month index change. Overall that means that the big drop in fuel oil and gas (following previous massive monthly increases) swamped the huge increases everywhere else,” wrote Jeffrey Tucker, president of the Brownstone Institute think tank and columnist for The Epoch Times.

But while the annual 8.5 percent pace of inflation was, indeed, a slowdown from the prior month, several categories the BLS uses to calculate the price index soared, with one key gauge hitting a multi-decade high.

The food-at-home index, which represents food purchased in places like grocery stores for consumption at home, jumped by an annual 13.1 percent, which is the fastest pace since March 1979.

“Consumers are getting a break at the gas pump, but not at the grocery store,” Bankrate Chief Financial Analyst Greg McBride told The Epoch Times in an emailed statement. “Food prices, and especially costs for food at home, continue to soar, rising at the fastest pace in more than 43 years.”

And even though the overall month-over-month CPI index growth came in at 0.0 percent, the vast majority of food-at-home items that make up the index also saw month-over-month increases, including potatoes (+4.6 percent), coffee (+2.7 percent), peanut butter (+3.5 percent), chicken (+1.4 percent), and eggs (+4.3 percent).

Experts say that the lagging nature of the shelter component of the price index means inflationary pressures are likely to stay high for at least several more months.

“Shelter costs are still rising at a knee-buckling pace, and accounted for 40 percent of the increase in the core CPI,” McBride said. “Change in rent prices, in particular, tend to lag increases in home prices so we can expect to see continued moves higher for months to come in what is the biggest component of the inflation index.”

The so-called “core” CPI inflation measure, which excludes food and energy and is viewed as a better gauge of underlying price pressures, remained unchanged in July at 5.9 percent in annual terms, and up 0.3 percent in monthly terms.

The fact that core CPI rose over the month suggests inflation could stick around for longer and maintain pressure on the Fed to keep hiking rates aggressively, despite stocks and other risk assets rallying following Wednesday’s relatively soft inflation print.

‘Not Near Done Yet’

Commenting on Wednesday’s inflation print was San Francisco Fed President Mary Daly, who sought to temper market expectations that the Fed might soon pivot away from tighter monetary policies.

“There’s good news on the month-to-month data that consumers and business are getting some relief, but inflation remains far too high and not near our price stability goal,” Daly told the Financial Times, joining other Fed officials who made public statements pushing back against market optimism on fewer or smaller rate hikes going forward.

Daly addressed the uptick in the core price reading, led by a rise in services inflation, which she said showed little signs of easing.

“This is why we don’t want to declare victory on inflation coming down,” she told the outlet. “We’re not near done yet.”

Minneapolis Federal Reserve Bank President Neel Kashkari said on Wednesday that he thinks the Fed will raise its benchmark rate another 1.5 percentage points this year and more in 2023, telling the Aspen Ideas Conference that the central bank is determined to crush inflation even if it causes a recession.

The Fed is “far, far away from declaring victory” on inflation, Kashkari told conference attendees, despite the “welcome” news in the CPI report that inflation may have cooled somewhat.

Kashkari acknowledged that the Fed’s sharp rate hikes might push the economy into a recession, but that’s a risk worth taking to get prices down, he said.

While the U.S. economy has contracted for two consecutive quarters and met the informal rule-of-thumb definition for a recession, the downturn hasn’t yet been formally declared as a recession by the committee of economists at the National Bureau of Economic Research, who serve as the official arbiters in recession calls.