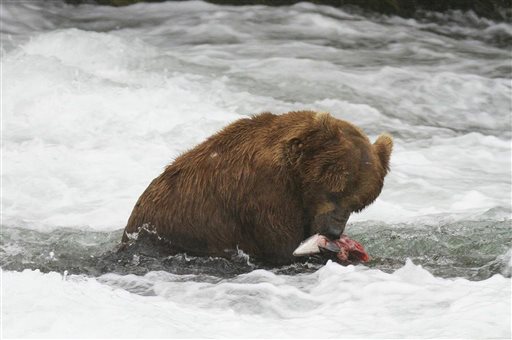 In this July 2012 photo provided by Roy Wood and explore.org, a bear is seen eating a fish at Brooks Camp in Katmai National Park and Preserve, Alaska. The stars of a widely popular Internet series are ready for their second season. The stars in this show are the grizzly bears of Katmai National Park, and they will be coming to a small screen near you with more cameras and different angles as they fight to get a bounty of salmon before winter sets in. (AP Photo/Roy Wood and explore.org)
Americas

A Canadian hunter recently spoke about getting attacked by a grizzly bear in British Columbia, Canada.

Wilf Lloyd spoke with the CBC about the incident, saying, “Within a second he was on top of me.”

“I heard a noise below me,” he told the broadcaster. “And I just knelt down to pick it up and I heard a thud, and I looked up, the grizzly’s eyes were locked right on me and he was full charge and he was about seven feet away.”

He estimated that the bear was between 10 and 12 years old and weighed approximately 450 to 500 pounds.

Lloyd, a 56-year-old taxidermist, was in Cranbook to hunt elk with his family when he was attacked by the bear.

“I went to get up. I went to grab my gun and I yelled at Skeet, ‘Bear! Bear!'” added Lloyd, referring to his son-in-law Skeet Podrasky. “He hit me in my chest and rolled me, and within a second he was on top of me.”

He noted that the bear put its paws on his chest and was looking for his face and throat.

“He’s made a decision to come in on me. He brings his head down towards my face and I jam my whole left arm right into his mouth. And as he did that, he’s starting to clamp down, and Skeet shot him,” Lloyd elaborated.

The shot caused the bear to release his arm, but he Lloyd said that he was shot in his leg during the struggle.

The bear then charged him and Podrasky before they shot and killed it.

According to CTV, Lloyd is now recovering at his home in Cranbrook.

“The man saved my life,” added Lloyd. “What Skeet did and because of his fast reaction, the shots, I had maybe fifty stitches in my hand and that’s it. So I was very fortunate that way.”