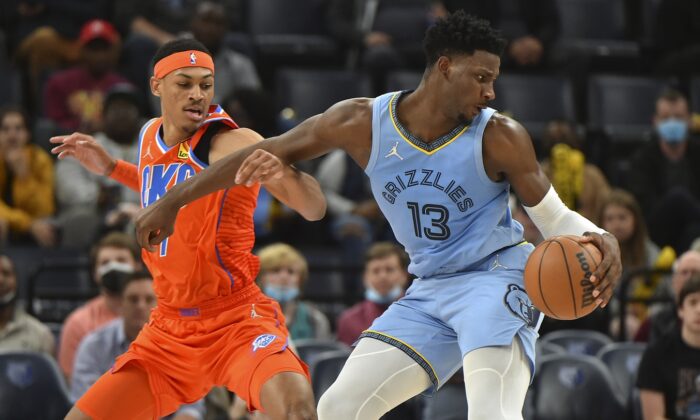 Jaren Jackson Jr. scored 27 points to lead the Memphis Grizzlies to a franchise record for points and the biggest winning margin in NBA history, 152–79 over the visiting Oklahoma City Thunder on Thursday.

The previous NBA record for largest margin of victory was 68, by the Cleveland Cavaliers over the Miami Heat on Dec. 17, 1991.

Memphis’ previous record for points was 144, set in January 2007 against the Golden State Warriors.

The Grizzlies stretched their winning streak to three. The Thunder have lost eight in a row and 10 of their past 11.

Memphis, which never trailed, started stretching the lead quickly. The Grizzlies jumped ahead by 18 in the first quarter, then 36 by halftime (72–36), thanks to a 29–8 run to end the half.

Just past the midpoint of the third quarter, the Grizzlies stretched their lead to 52. Memphis kept pouring it on, leading by as much as 78 (145–67).

The Grizzlies got 93 points from their bench, with De’Anthony Melton scoring 19, Santi Aldama 18, and John Konchar 17. Aldama also had 10 rebounds.

Melton was 8 of 10 from the floor and only one Grizzlies player shot less than 50 percent (Desmond Bane was 1 of 6). Tyus Jones had 10 points and nine assists.

Memphis scored 31 points off the Thunder’s 20 turnovers and 82 points in the paint, shooting 41 of 55 inside.

Oklahoma City was without leading scorer Shai Gilgeous-Alexander, who was out due to concussion protocol.