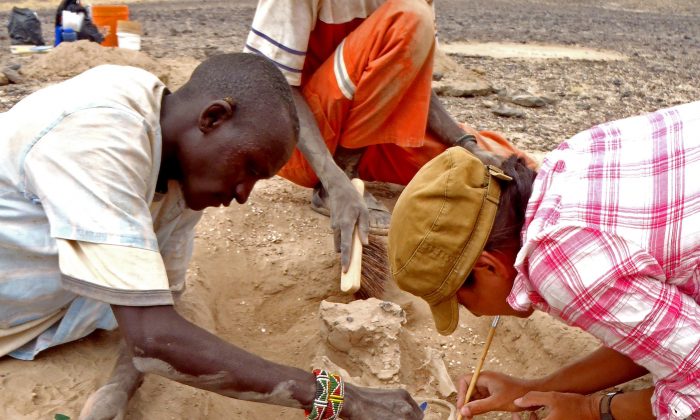 Scientists have found grisly evidence of a massacre in Kenya about 10,000 years ago, providing rare evidence of violence between groups in ancient hunter-gatherer societies.

Researchers said the discovery casts light on the poorly understood roots of warfare.

A prehistoric massacre 10,000 years ago and the birth of war https://t.co/0OMc4swzQS pic.twitter.com/f4hjbX7zED

Evidence of violence appeared in 10 of 12 relatively complete fossil skeletons the scientists found by what used to be the edge of a lagoon. That included five or six cases of apparent arrow wounds to the head or neck, and five cases where the head was smashed with something like a club. One skull had a sharpened stone still embedded.

The researchers said the wounds would have been fatal immediately or soon thereafter.

Two skeletons didn’t show evidence of violence but the position of the hands suggested they might have been tied up at the time of death. One was a woman who was pregnant or had recently given birth.

The 12 bodies were adults, and at least four were female. The site also revealed partial remains of at least 15 other people.

The 2012 discovery, made west of Lake Turkana, was reported by scientists at Cambridge University and elsewhere. Writing in a paper released Wednesday by the journal Nature, they said it’s one of the clearest cases of violence between groups among prehistoric hunter-gatherers.

The reason for the violence is not clear. The victims may have been raided for resources, like territory or food stored in pots, the researchers said. Or the violence may have resulted from antagonism between two groups, they said.