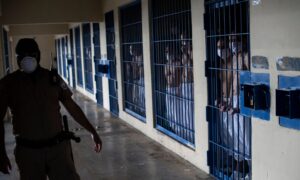 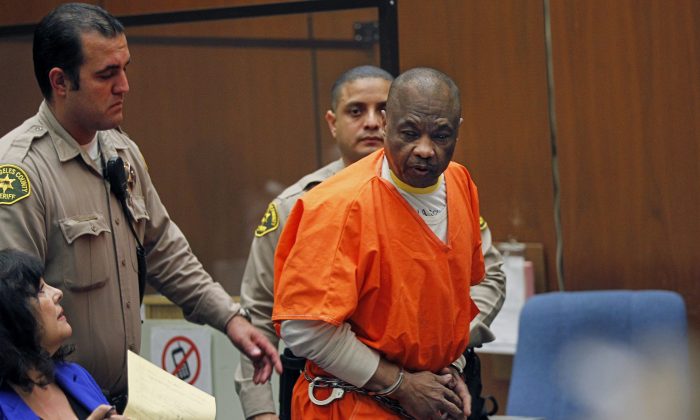 Lonnie Franklin Jr., who has been charged with 10 counts of murder in what have been dubbed the "Grim Sleeper" serial killings that spanned two decades, arrives for a court hearing in Los Angeles on Friday, Feb. 6, 2015. Franklin is scheduled to go on trial at the end of June after anguished family members of the victims told a judge Friday they were tired of years of delay. The 62-year-old is accused of shooting eight of the victims and strangling two of them from 1985 to 2007, the brunt of the crimes during a period when crack cocaine plagued parts of Los Angeles. Police arrested Franklin in July 2010 after his DNA was connected to more than a dozen crime scenes. At left, is attorney, Louisa Pensanti. (AP Photo/Nick Ut)
Crime and Incidents

LOS ANGELES—Their bodies were dumped in alleys and garbage bins in south Los Angeles, some naked, some covered with mattresses and trash. Most had been fatally shot in the chest after some type of sexual contact, others strangled.

As prosecutor Beth Silverman showed photo after photo of the 10 victims to a packed courtroom on Tuesday, family members of the dead young women shook as they wept. Some covered their faces, others had to walk out.

It was an emotional beginning to the long-awaited “Grim Sleeper” trial, which comes more than 30 years since the first victim’s death.

Lonnie Franklin Jr. has pleaded not guilty to killing nine women and a 15-year-old girl between 1985 and 2007 in one of the city’s most notorious serial killer cases. The “Grim Sleeper” nickname was coined because of an apparent 14-year gap in the murders between 1988 and 2002.

Franklin, 63, has been awaiting trial behind bars for nearly six years since his arrest in July 2010. The trial is expected to last up to four months.

In opening statements to jurors Tuesday, Silverman said Franklin took advantage of the crack cocaine epidemic in south Los Angeles, targeting women “willing to sell their bodies and their souls in order to gratify their dependency on this powerful drug.”

Autopsies showed all but one victim had cocaine in their systems when they were killed, and some had turned to prostitution.

“This was the perfect opportunity for someone who preyed on women,” Silverman said. “Someone who knew the streets and the dark alleys by heart, someone who lived there and was able to blend in, someone who knew where the drug-addicted women and perhaps prostitutes would congregate and who knew how to lure potential victims into the darkness and the isolation of a vehicle through the promise of crack.”

Silverman continued: “It was the perfect place and time for a serial killer to roam the streets of Los Angeles, really without detection.”

Last week, Amster told The Associated Press that “it’s not over until it’s over.”

“There’s more to it than people want to believe,” Amster said. “It’s up to the prosecution to prove the case beyond a reasonable doubt.”

As many as 30 detectives investigated the Grim Sleeper killings in the 1980s, but they exhausted leads within a few years.

A special squad of detectives was assembled after the most recent known Grim Sleeper killing, the June 2007 shooting of Janecia Peters, 25, whose naked body was found in the fetal position inside a trash bag.

Police arrested Franklin in July 2010 after his DNA was connected to more than a dozen crime scenes. An officer posing as a busboy at a pizza parlor got DNA samples from dishes and utensils Franklin had been eating with at a birthday party.

Family members of the Grim Sleeper victims and a survivor of the attacks have been frustrated by repeated delays in the case and were eager for the opening statements.

Porter Alexander, the father of one of the victims, was 48 when his 18-year-old daughter was killed. He’s now 75.

“The day of reckoning is here,” Alexander said last week. “You can’t help but be excited that you lived to see an end to this madness. It’s been a long road, and I’m glad I’ll physically be able to be there.”

When photos of his daughter’s naked body were shown in court, Alexander walked out as other family members comforted his weeping wife.

The Grim Sleeper was among at least three serial killers who stalked Los Angeles-area women during a crack cocaine epidemic in the 1980s and 1990s.

The attacks were dubbed the “Southside Slayer” killings before authorities concluded more than one attacker was involved.