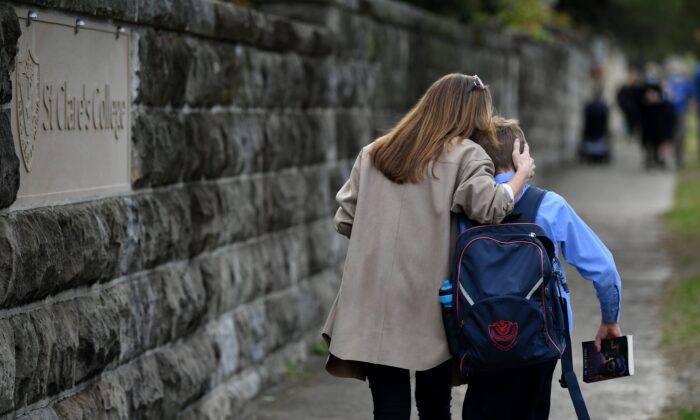 In his latest book, “The Boy Crisis,” Warren Farrell makes this chilling point. “For the first time in American history, our sons will have less education than their dads.”

Farrell explained that when girls were doing badly in maths and science, it was decided that “the trouble was with the schools.” His country tackled the problem and girls are now thriving. But now boys are doing badly in almost every subject and what do we conclude? “The trouble is with the boys.”

It’s that darned “toxic masculinity,” that’s the problem. Our entire education system in Australia, with unrestrained glee, now has that firmly in its sights, ignoring the increasing gender gap between boys and girls.

Education bureaucrats have been carefully ignoring what’s happening to boys for over half a century.

Nearly 40 years ago, I was interviewing a senior New South Wales (NSW) bureaucrat about how badly boys were doing in schools. “What do we do if we find girls continue to draw ahead of boys?” I asked her. “We wait 2,000 years and continue to analyse the results very, very carefully,” said this director of the curriculum.

She later claimed that it was a joke, but that appears to have been the approach of many feminists who are involved in the running of the nation’s education system since that time.

This was in the mid-1990s and they’ve been sitting pretty ever since the 1972 Whitlam government introduced strategies to encourage girls’ achievement in schools. Girls were surging ahead across the board.

But the endless promotion of girls’ achievement threatened to come unstuck when suddenly parents started to notice what was happening to the boys.

Robert MacCann from the NSW Board of Studies released a startling report on gender differences in final school results which showed girls thriving while boys’ results dropped through the floor.

Suddenly, the newspapers were full of stories of irate parents demanding to know what was going on. Parents sent me cuttings from local newspapers showing the smiling faces of girls winning all the prizes in school speech days whilst boys filled the remedial classes or dropped out of school.

It was obvious that girls’ education strategies had more than levelled the playing field. But was that the main goal for the feminists now firmly entrenched in our education departments?

A letter I received in response to my articles on boys’ education spelled out their goals very clearly.

“Girls today are far beyond needing equality. They need compensation for 2,000 years of being repressed, mutilated, enslaved, raped, and treated as inferior,” a hostile reader wrote.

Similar sentiments, more tactfully expressed, were published in an education department gender equity magazine, “But the Girls Are Doing Brilliantly,” suggesting that increasing girls’ performance in maths and science wouldn’t provide girls with career success, nor better paying jobs or increased workforce participation. More had to be done.

This mob wasn’t at all happy when governments responded to the massive community disquiet about the boys being left behind with two parliamentary inquiries.

The first, led by Liberal backbencher Stephen O’Doherty in NSW made worthy recommendations only to have the project shelved when Bob Carr’s Labor government came to power, kowtowed to the teacher’s union, and buried the whole thing.

Next came the Howard Government’s House of Representatives Inquiry where the bipartisan committee unanimously recommended programs to assist boys, especially in literacy.

The Deputy Chair, Labor MP Rod Sawford, spoke out about the “state of denial” the committee encountered in education bureaucrats and academics, due to “the fear that addressing boys’ issues would undermine ongoing support for strategies for girls.”

But naturally, Labor wasn’t having a bar of this and funding for boys’ initiatives rapidly dried up when the Coalition lost power.

Here we are 20 years later—with boys’ education totally off the agenda.

Additionally, most of the data showing how bad boys are slipping behind in school never sees the light of day.

Evidence that is available reveals a dire picture of boys in trouble:

Over the past two decades, we have seen more and more measures introduced which favour girls’ achievement, such as the inclusion of one compulsory English unit in the calculation of NSW tertiary entrance marks in 1994, and a second seven years later.

There’s long been a shift to assessment methods that favour girls, like ongoing assessment rather than exams. Further, as male teachers are now outnumbered 2.8 to 1, there are also concerns that female teachers’ will have a bias against boys with female teachers more likely to mark boys down, an OECD study found.

In view of our coming election, parents need to start asking politicians tough questions driving boys’ education back onto the agenda.