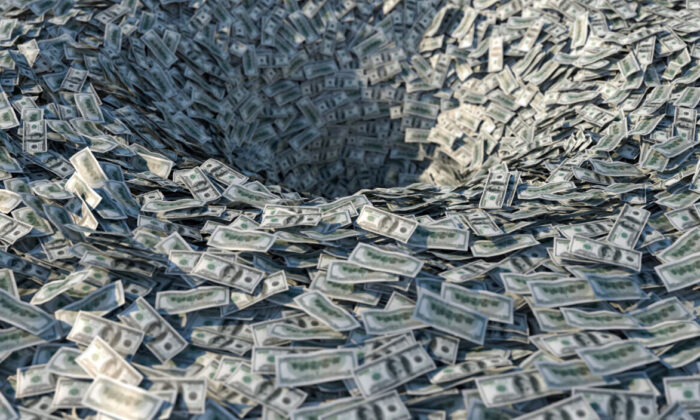 For many years, there was a reliable, amusing symbol of wasteful government spending: shrimp on a treadmill.

In the mid-2000s, the National Science Foundation (NSF) funded an experiment to test how bacterial infection would impact the mobility of certain crustaceans, and researchers did it by putting shrimp on a literal treadmill. For further research, the Grice Marine Laboratory at the University of Charleston received $559,681. Videos of the shrimp at the metaphorical gym became a YouTube sensation, but despite ridicule, up to $1.3 million in funding continued into 2018.

At least it was a visual we could all look at and have a chuckle. As part of his legacy of fighting government waste, the legendary U.S. senator the late Dr. Tom Coburn (R-Okla.) made the shrimp famous in a 2011 report (pdf).

Instead of shrimp, 2021 saw cats on a treadmill. But disturbingly, they’d been “decerebrated”—their brain stems were sliced in order to deaden their reflexes, while researchers reportedly placed electrodes on their spinal cords to direct their movements. According to the White Coat Waste Project, it cost the taxpayer $550,000 in the form of a grant sent to the Pavlov Institute of Physiology in St. Petersburg, Russia. With research this upsetting, it’s doubtful any Pavlov’s cat jokes will be coined.

The feline experiment came after the National Institutes of Health (NIH) received significant backlash over an experiment that saw 6-month-old beagle puppies injected with both cocaine and another “experimental” chemical compound while a surgically inserted device monitored vital signs. The dosing lasted for months before the puppies were reportedly killed or repurposed, both outcomes that are ethically questionable by NIH’s own standards. The brutal treatment of these puppies cost taxpayers $2.3 million.

The reason such experiments persist is often because the Food and Drug Administration (FDA) has outdated rules that require live experiments before approval for drugs. It’s a matter that raises bipartisan concern, with Senators Cory Booker (D-N.J.) and Rand Paul (R-Ky.) cosponsoring a bill that would modernize the FDA and end the mandatory testing.

Elsewhere, the National Institute of Allergy and Infectious Diseases (NIAID)—home to Dr. Anthony Fauci—spent nearly half a million dollars in 2021 and 2022 to inject hormones into male monkeys to make them female. Transgender monkeys were supposedly meant to study female hormone therapy’s effects on susceptibility to HIV.

Meanwhile, in the metaverse, the University of Wisconsin was awarded $300,000 from the NSF in 2020 to create a virtual reality learning experience about penguins. Joey the Penguin is meant to promote research that can only be done in the Arctic and Antarctic.

The downright strange spending happened in tandem with the massive COVID-related expenditures, which were certainly more urgent but no less wasteful. Paycheck Protection Program loans amounting to $3.6 billion were given to 57,000 entities on a “Do Not Pay” list kept by the Treasury Department. Another almost $3.5 billion (pdf) went to deceased people via stimulus checks, simply because the IRS didn’t check in with the Social Security Administration, which keeps track of who’s alive and who’s passed.

That’s over $7 billion lost because nobody double-checked their work, a skill most of us pick up in grade school.

Against that backdrop, and a $30 trillion national debt, these increasingly dark science experiments need to be pared back, prioritized, and re-checked for ethics. It’s all enough to make one long for simpler times when shrimp were hitting the gym.