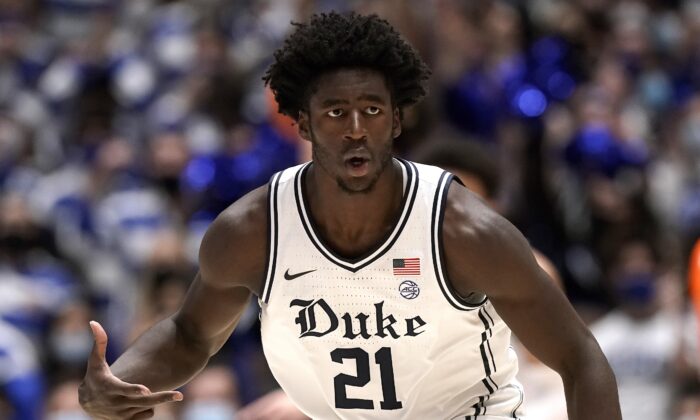 Duke forward A.J. Griffin (21) reacts following a basket against Syracuse during the first half of an NCAA college basketball game in Durham, N.C., on Jan. 22, 2022. (Gerry Broome/AP Photo)
Sports

Griffin was one of four players for Duke (15–3, 5–2 Atlantic Coast Conference) with 15 points, joining Paolo Banchero, Wendell Moore Jr., and Mark Williams. Banchero had 13 rebounds for his fourth double-double of the season.

Griffin swished 3-pointers on his first two shots to spark Duke’s 11-2 run out of the gate. Syracuse surged back with a 1–5 stretch but never took the lead from Duke.

Joey Baker had 11 points and Jeremy Roach dished out a career-high nine assists for Duke.

Saturday marked the 16th meeting between Duke coach Mike Krzyzewski and Syracuse coach Jim Boeheim, who are 1-2 atop the career wins list among Division I men’s basketball coaches. Krzyzewski leads the head-to-head series 11–5.

Duke: The Blue Devils bounced back from their loss to Florida State in an emphatic way, beating Syracuse in nearly every facet of the game. The Blue Devils were efficient in sharing the ball, too, totaling 25 assists to just 12 turnovers.

Syracuse: The Orange have lost five of their last seven games and their hopes of earning Boeheim another NCAA tournament berth are dwindling. Syracuse made just five 3-pointers, tied for its lowest of the season.

Syracuse: The Orange stay on the road, playing at Pitt on Tuesday.