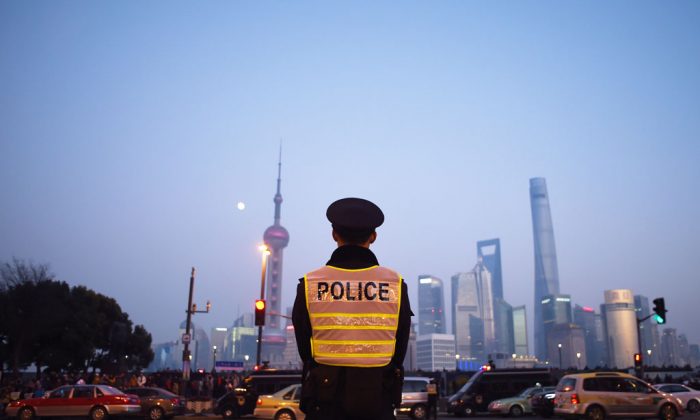 A police officer stands guard at the site of the New Year’s Eve stampede in Shanghai, on Jan. 3, 2015. Shanghai authorities have tightened censorship over the incident by blocking online criticism, summoning Internet users, and suppressing the press. (Wang Zhao/AFP/Getty Images)
China

The deadly stampede in Shanghai on New Year’s Eve has brought great sorrow to the city. Rather than consoling victims’ families, Shanghai authorities seem more worried about being blamed for the disaster, blocking online criticism, summoning Internet users, and suppressing the press.

Days after the incident, the official death toll stands at 36, and Shanghai authorities haven’t apologized or given any explanations for what caused the stampede. Facing a cold response from the government, public complaints have grown louder, with many urging the resignation of the mayor and city’s Communist Party secretary.

Some Chinese Internet users believe the Shanghai authorities have covered up the true death toll.

“Inside sources in Shanghai released information saying the stampede’s death toll is over 70, and over 300 people were injured,” Hong Kong Internet user “Eagle war BBC” posted on Weibo, a Chinese platform similar to Twitter. “Shanghai authorities were very scared of the incident, and ordered the [lower] death toll number.”

Some Chinese netizens listed dozens of severe disasters in China in the past few years that all had death tolls of 35 or 36, such as the oil pipeline explosion in Qingdao of Shandong Province in November 2013 and the Wenzhou train collision in 2011. Many Chinese speculate that if the death toll goes above 36, officials will be held responsible by the central authorities.

Many comments on the Chinese Internet that criticize the Shanghai government’s management of the incident have been censored, while some Internet users were taken away by police.

A Shanghai official said that dozens of Internet users have been summoned for their online comments over the stampede, according to the Hong Kong newspaper South China Morning Post.

Internet user “Weng Tao micro-comment” remarked on the Chinese microblog Sina Weibo that his former account was blocked due to his critical comments. “Shanghai government can’t escape responsibility no matter what. Facing critics, how could unreasonably blocking and silencing speech erase the blood of 36 innocent lives?” wrote “Weng Tao micro-comment.”

Shanghai official media’s unfeeling response to the disaster has also outraged society. On the day after the incident, none of the three major Shanghai newspapers put the stampede on the front page. Instead, all of the front pages focused on Chinese Communist Party General Secretary Xi Jinping’s New Year greeting.

The Shanghai Communist Party’s official newspaper, Liberation Daily, only had 130 words about the deadly incident in the bottom right corner of the front page.

The press censorship was “unprecedented and harsh,” according to the South China Morning Post (SCMP).

An “emergency notification” issued by the Shanghai Propaganda Department to censor media reports over the stampede has been circulating since early on Jan. 2. The overseas Chinese-language media outlet the China Digital Times, which collects inside information from mainland sources, published the full text.

The notification requires all traditional media, online media, and self-published media to only use authorized reports by the central media or Shanghai’s official media, and forbids any independent reporting.

“All news websites are not allowed to put the deadly stampede in the headline,” and “information attacking the Party, government, and the social system must be strictly deleted,” the note says.

Three senior Shanghai reporters confirmed to the SCMP that they’ve received notifications several times from the Shanghai Propaganda Department, with many restrictions on what to report about the stampede.

The reporters also said that people claiming to be volunteers interfered with them when they sought to interview victims’ family members in the Shanghai No.1 People’s Hospital. The “volunteers” didn’t allow the reporters to interview, saying it obstructed the hospital’s work.