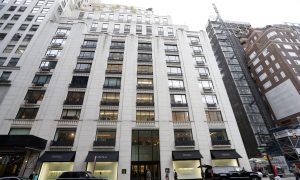 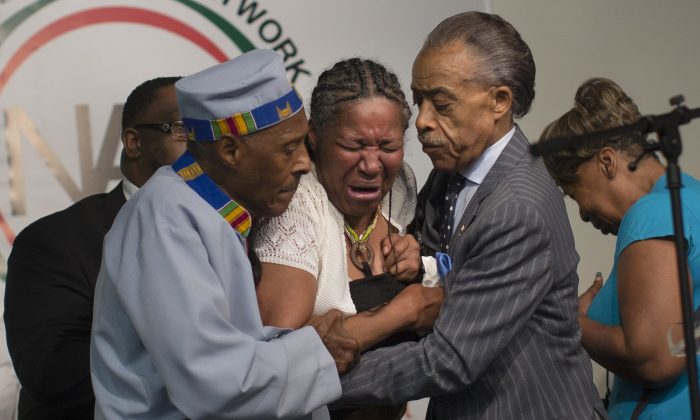 Esaw Garner, wife of Eric Garner, breaks down in the arms of Rev. Herbert Daughtry (L) and Rev. Al Sharpton during a rally at the National Action Network headquarters for Eric Garner on Saturday, July 19, 2014. (AP Photo/John Minchillo)
New York

NEW YORK—The climate was raw and strained along the short Bay Street where Eric Garner, a 43-year-old black man, died while being arrested on Thursday.

Women, men, and children, white and black, stopped to absorb the heartfelt dedications by the makeshift memorial of candles and cardboard tributes laid at the site of Garner’s death on a commercial strip on Staten Island.

“On this day the community, the world, lost a wonderful man with a heart of gold. He was a gem, a truly genuine good hearted soul that was robbed from us all,” one message read.

Police say they attempted to arrest Garner for illegally selling cigarettes. In videos taken by bystanders, Garner can be seen arguing with police officers. When one tried to handcuff him, Garner broke free. Another officer then placed Garner in what Police Commissioner William Bratton said appeared to be a chokehold and pulled him to the ground as other officers swarmed in.

In Garner’s neighborhood on Sunday, amid the atmosphere of grief, pulsed a simmering sense of injustice and outrage that was scarcely contained.

“He was a big teddy bear. He never bothered anyone. He had chronic asthma. He did not deserve it! It’s police brutality,” said Carletta, an elderly black woman jarred by the violent death of the friend she had known since they both lived in Brooklyn 15 years ago.

Across from the site of Garner’s death, lies a notorious triangular patch of land—Tompkinsville Park—which locals say is a hub for drunks and drug dealers.

“The park’s the problem. The drunks there, the people selling drugs,” said Dina, who attributes Garner’s death to a misconception by police that all the residents are drug dealers.

According to Dina, her husband, a black man, was aggressively arrested by eight police officers, wrestled to the ground, and placed in a chokehold, when he was walking their dog on June 11. He was arrested on suspicion of marijuana possession, said Dina, who would not provide her last namefor fear of being “connected by police with the people who sell drugs.”

There was a distinct community feel among the mourners, who shared tears and words of grief and anger. They also disputed, heatedly at times, the details of their friend’s passing. Their exchanges reflect long-standing neighborhood connections and bonds formed in the face of perceived oppression.

“It’s just police brutality; not a black thing; not a white thing,” said Dina, 45, who had known Garner since they were both children. “It’s not stop and frisk here,” she said, “It’s stop and choke.”

Chokeholds are banned under police department policy. According to the NYPD Patrol Guide, the definition of a chokehold includes, “but is not limited to any pressure to the throat or windpipe, which may prevent or hinder breathing or reduce intake of air.” In the video recorded by bystanders Garner can be heard saying “I can’t breathe,” several times.

According the the Civilian Complaint Review Board, there were 94 complaints registered against police officers using chokeholds this this year. Despite the policy that chokeholds cannot be used, the number of complaints has remained steady, averaging at over 200 complaints per year since 2005.

A young, Ukrainian-born, folk-singer, arrived with her guitar to temporarily curb the site’s intensity with a melodic tribute to the abruptly ended life of her neighbor. The song she sang was titled “Profitable Trade”, lamenting a world preoccupied with monetary loss and gain, disconnected from human feeling.

“This has already become a trade,” she said, referring to the presence of commercial media in the wake of Garner’s death, each trying to push their own profitable angle.

As of press time on Sunday, the medical examiner’s office did not provide Garner’s determined cause of death. The case is being investigated by the Staten Island attorney general’s office and the NYPD Internal Affairs Bureau.

Funeral services for Garner are scheduled for 7 p.m. on Wednesday at the Bethel Methodist Church in Brooklyn.

Meanwhile in a Manhattan church, the civil rights activist and Rev. Al Sharpton called on the faith community to unite and demand justice for Garner.

At the Riverside Church in the Upper West Side on Sunday, Sharpton expressed shock and outrage at the apathy of police officers who stood by as Garner kept repeating that he had difficulty breathing after an officer put him in a chokehold and brought him to the ground.

“When does your sense of humanity kick in? When does our consideration of human beings kick in?” Sharpton said to the nearly full congregation of several hundred.

Sharpton was a guest preacher at the church on Sunday. Churchgoers applauded and cheered to his comments condemning the police’s treatment of Garner.

Sharpton compared Garner’s case to one in 1994 when a 23-year-old man from Staten Island, Ernest Sayon, died after suffering a head injury incurred during an altercation with police.

He noted that both Sayon and Garner’s deaths happened when William Bratton was police commissioner, but this time, there is video evidence of the struggle with police.

The officer who placed a chokehold on Garner was identified by the police department as Daniel Pantaleo of the 120th precinct. Pantaleo has been placed on “modified assignment” with his gun and badge stripped.

The president of the city’s largest police union, Patrick Lynch, called the department’s actions against Pantaleo a “completely unwarranted, knee-jerk reaction for political reasons and nothing more.”

“Society relies on police to keep order and maintain the peace in our neighborhoods and society must give our police the benefit of the doubt when a tragedy occurs in the performance of their duty,” Lynch said in a statement.

In the first lawsuit, settled by the city in January, two black men accused Pantaleo and other officers of arresting them without cause and subjecting them to a “humiliating and unlawful strip search” on the street in which they were ordered to “pull their pants and underwear down, squat and cough.” The men said they were held overnight on charges that were ultimately dismissed.

In a second lawsuit, a man accused Pantaleo and other officers of misrepresenting facts in a police report and other documents to substantiate charges that also were dismissed.