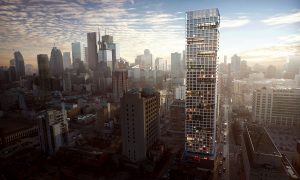 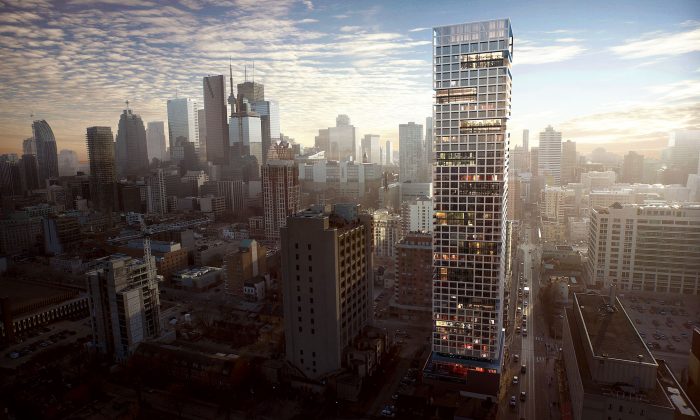 Rendering of CentreCourt Developments’ Grid Condos, a high-rise residential condominium project located at the corner of Dundas and Jarvis in downtown Toronto next to Ryerson University’s urban campus. It is also near other institutions such as St. Michael’s teaching hospital, George Brown College, Canada’s National Ballet School. The Dundas streetcar stops at Grid’s doorstep, and the Yonge subway is just steps away. (Courtesy CentreCourt Developments)
Canadian Content

Grid Condos: East Is Where It’s At

TORONTO—Shamez Virani, senior VP of CentreCourt Developments, has a passionate perspective on downtown Toronto’s burgeoning east development, with good news for investors. CentreCourt is the developer behind Grid Condos, located at the corner of Dundas and Jarvis in the heart of the Learning District in Toronto’s east downtown.

Virani believes that the next hot spot in Toronto is unquestionably the eastern downtown area. When his company launched Core Condos last year, the project, which is located at Shuter Street and Dalhousie near St Michael’s Hospital, sold out in a matter of days.

“This was our first foray east of Yonge Street, and we were pleasantly surprised with the results. The project was immediately bought up by astute investors and end-users,” he says.

The success of Core Condos confirmed the company’s belief in the Toronto downtown east as the place for new condominium development.

Toronto’s downtown east is presently under-developed with regards to condos. That is why Core sold out so quickly and why Grid Condos, the company’s newest project, is expected to equal that performance when it is released for sale in the next few weeks.

“The main driver of what’s happening in the area is Ryerson University,” Virani says.

“With 40,000 students and major multi-disciplinary programs, Ryerson is the fastest-growing university in the country. Kitty corner to our site are two parking lots which Ryerson owns. They are in development for a future science school, ensuring growth and demand for residential options for years to come.”

“Generally speaking, there is a 10-15 percent gap in prices between projects west of Yonge and east of Yonge. But rental rates do not reflect this disparity. When investors do the math they quickly see that east is a better investment in terms of a return on investment. Furthermore, given the gap in pricing between the west and east sides of Yonge, I believe the east side has far more room for price appreciation over the forseeable future,” he explains.

“East of Yonge Street has had a real jolt of life in terms of the number of developments and the velocity of the number of sales. This area is hot and this is where the investor should be looking to put their money.”

Virani uses the example of the Entertainment District. Ten years ago the Entertainment District was a relatively unknown neighbourhood with limited residential development. Today it is an incredibly vibrant area filled with young professionals living and working downtown and infusing the neighbourhood with energy. This transfotmation all started with a huge uptick in the number of residential developments that have been completed over the past five years. East of Yonge will see that same kind of renaissance with all the projects scheduled to be completed over the next few years, and the smart investor would do well to put his money into this area.

Obviously the scarcity of land in the downtown core and in the western downtown neighbourhoods is a major factor contributing to growth in the east.

The development of Toronto’s waterfront east of Yonge Street is positively impacting growth.

“The city is presently involved in conversations about the Gardiner, bringing lots of attention to the area,” says Virani.

“No matter what the solution is it will create more connection of the east end lands to the centre. The Pan Am Games development is also impacting on this as well. We’re going to see the energy and vibrancy of the eastern waterfront spread north.”