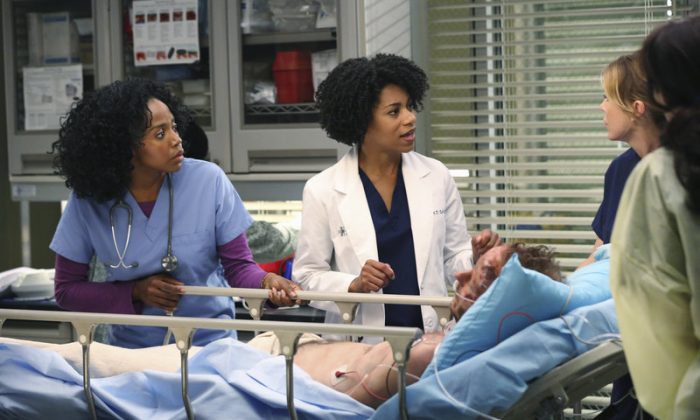 Meredith and Maggie are two of the characters featured in new images from the Grey’s Anatomy season 11 premiere, while Derek is nowhere to be seen.

Maggie, Meredith’s half-sister, is set to fill in for departed Cristina.

ABC released the official description of episode 1 along with the new pictures.

“With Cristina gone, a new doctor, Maggie Pierce (Kelly McCreary), making the rounds and Derek wanting to move to Washington DC, Meredith struggles to regain a sense of normalcy both at home and in the hospital,” it says.

“Meanwhile, Callie and Arizona come to a decision about surrogacy, Amelia overhears a big secret, Bailey realizes she will have to fight Alex for Cristina’s board seat and a freak accident causes two teenagers to be caught in a very compromising position, on the must-see season premiere.”


Regarding the season, showrunner Shonda Rhimes previously said that it would be focused on Meredith, and that while she and Derek are struggling they will likely not split.

A video clip released earlier this month showed Meredith telling Derek that she’s not going to Washington, opting to stay in Seattle.

Also, April tells Jackson that it seems like Derek is “dying inside” as Meredith leans on Alex after Cristina’s departure.

Meredith is pondering whether the marriage can survive the living arrangement debate with Derek.