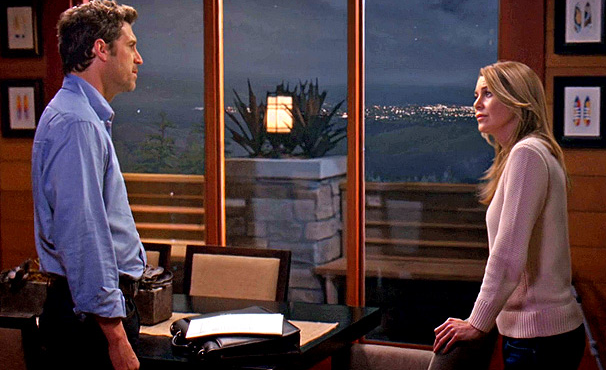 Grey’s Anatomy season 11 is going to include Meredith and Derek in a big argument, over whether Derek should move to Washington, D.C. or not.

“Right now, if you were in the writers’ room, you would probably tell me that the theme is ‘Meredith,'” Rhimes said last month.

“Because all I keep saying is, ‘The show is just about Meredith Grey!’ It’s really a Meredith-centric season. She’s lost her ‘person,’ her [half-]sister has shown up, her husband is chafing to go someplace else…”

Entertainment Weekly recently obtained more details about the situation between Meredith and Derek–with Rhimes saying that the argument will probably not lead to divorce.

“I don’t think that it’s a marriage-ending argument,” Rhimes said.

“It feels very TV for people’s marriages to end over easy things or hard things. I actually would like to watch a couple have a hard time in their marriage, and have it not be that that means their marriage is over. There’s something really great about watching a couple have a mature marriage where stuff goes wrong, things are hard, and people try to push through it and figure it out.”

Then again, the argument will find the couple in a rough place when season 11 picks up after a time jump of about 24 hours.

“When we left them, they were fighting. When we come back, they’re still fighting,” Rhimes said.

“I like that they’re having this argument. It feels like an argument that two hard-working people have who love each other and who each have powerful careers.”