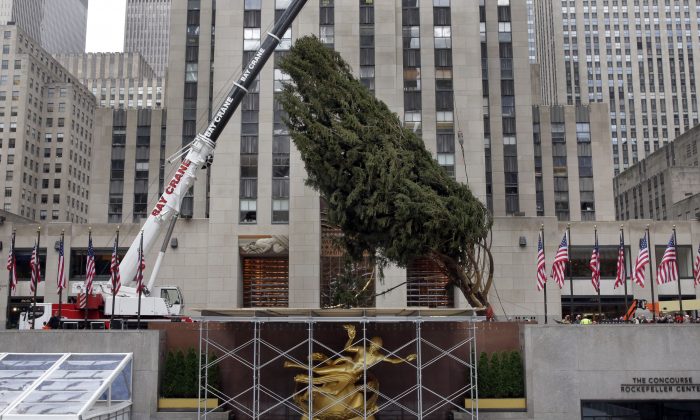 The 2014 Rockefeller Center Christmas Tree is raised by crane on Rockefeller Plaza, in New York, in this, Nov. 7, 2014 file photo. On Wednesday evening, Dec. 3, 2014 the air will reverberate with the voices of Lady Gaga, Tony Bennett, Mariah Carey, Cyndi Lauper and other music stars for the nationwide live broadcast of the lighting ceremony. Since the Great Depression, the Rockefeller Center tree has represented Christmas in New York City. (AP Photo/Richard Drew, File)
Entertainment

Gretchen Carlson of Fox News was slammed on social media Wednesday after she reacted to protesters amassing in New York City following a Staten Island grand jury decision not to indict an NYPD officer in the choking death of Eric Garner.

After the decision was handed down, Carlson said on Fox News, said that there has “been these protests in Times Square” after the Ferguson decision last week.

She added: “I certainly hope that nothing’s going to happen in New York City today and we’ve got the tree lighting ceremony today.” The tree lighting is in Rockefeller Center in Midtown Manhattan.

After she made the comment, Twitter users criticized her for being insensitive. “I will celebrate when gretchen carlson dies,” one person wrote on the site.

“Let’s thank @GretchenCarlson for the best protest idea ever. It may be your only contribution to social justice. Ever. But it’s a good one,” another user tweeted.

Added another: “What would else expect from that putrid cretin!”

“I nominate @GretchenCarlson to be the next Grand Dragon of the KKK,” another said.

Garner family attorney Jonathon Moore said the family was shocked by the decision, according to WYNC.

“I am actually astonished based on the evidence of the video tape, and the medical examiner, that this grand jury at this time wouldn’t indict for anything, is really just astonishing,” Moore said.

The officer accused in the case, Daniel Pantaleo, also issued his own statement.

“I became a police officer to help people and to protect those who can’t protect themselves. It is never my intention to harm anyone and I feel very bad about the death of Mr. Garner. My family and I include him and his family in our prayers and I hope that they will accept my personal condolences for their loss,” he said.