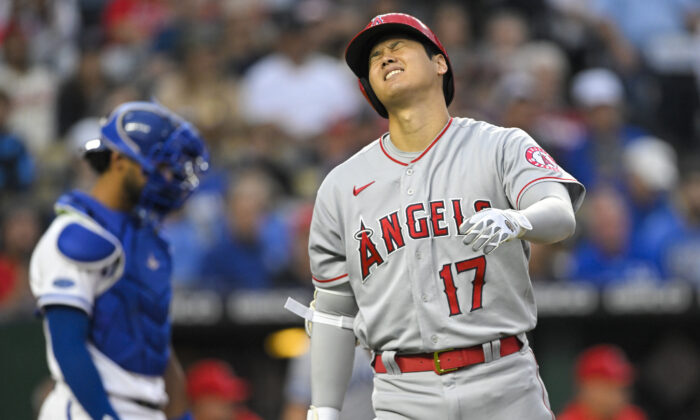 Los Angeles Angels' Shohei Ohtani (17) reacts after hitting a pitch off his leg during the third inning of a baseball game against the Kansas City Royals, in Kansas City, Mo., on Monday, July 25, 2022. (Reed Hoffmann/AP Photos)
Baseball

KANSAS CITY, Mo.—Zack Greinke is getting to the point in his career where it seems as though just about every start brings with it some kind of record, even those that the former Cy Young winner never anticipated seeing.

Hardly known for his overpowering stuff, Greinke nevertheless moved into the top 20 on Monday night while combining with four Kansas City Royals relievers to hold the scuffling Los Angeles Angels to five hits in a 7–0 victory.

Greinke scattered three hits over five innings before giving the ball to Amir Garrett (2–1), who worked around a leadoff double in the sixth. Jose Cuas handled the seventh, Scott Barlow the eighth and Josh Staumont finished off the ninth.

All the support came after Greinke departed: Michael A. Taylor drove in three runs, Emmanuel Rivera drove in a run during a four-run seventh, and MJ Melendez capped the rout with a two-run homer in the eighth.

Now, the Royals will go for their first four-game win streak of the season on Tuesday night.

It started with Greinke on Monday night. He navigated an error by Whit Merrifield in the first, worked around Shohei Ohtani’s double in the third and picked off Luis Rengifo for the final out of the fourth. Along the way, Greinke punched out Andrew Velazquez for his 2,856th strikeout, moving him past Jim Bunning and into the top 20 on the career list.

“It’s just amazing he’s still able to get outs at the big league level the way that he does,” Garrett said. “The game’s not going to push him out. When he wants to be done with the game, he’ll be done.”

Ohtani’s double came moments after he fouled a pitch off his leg and needed several minutes to walk it off.

Syndergaard also dodged trouble through five innings, leaving runners in scoring position in four of them. But the Royals finally caught up to him in the sixth, when Taylor delivered a two-out single to break up a scoreless game.

The Royals added four more runs off Aaron Loup and Ryan Tepera, thanks in part to an error and two wild pitches, before Melendez went deep off Austin Warren to put the game out of reach.

“Just kind of one guy after another,” Matheny said. “That was a great effort late.”

The Royals’ Nicky Lopez thought he had a leadoff triple in the fifth when Jo Adell failed to catch his fly ball to left field, but the call was overturned upon review and ruled a foul ball. Then in the sixth, the Angels’ Jared Walsh tried to reach third on a fielders’ choice and was initially ruled safe before a review once again overturned the call.

Angels: CF Mike Trout (rib inflammation), who was eligible to come off the injured list Monday, remained there after his cortisone shot in his back last week. “Progressing like we think. Basically, it’s a lot of rest right now as we manage our way through his IL days,” Nevin said. “It’s more of a day-to-day thing.”

Royals: C Salvador Perez (thumb surgery) will begin a rehab assignment at Triple-A Omaha on Tuesday. “He’s been going about it pretty hard here for a while,” Matheny said. “Watching everything he’s doing, he feels right.”

INF Bobby Witt Jr. was out of the lineup Monday after tweaking his hamstring over the weekend.

Angles LHP Jose Suarez (1–4, 5.60 ERA) gets the start Tuesday night while the Royals plan to bring back LHP Angel Zerpa (2–0, 1.29) from Double-A Northwest Arkansas to take the mound