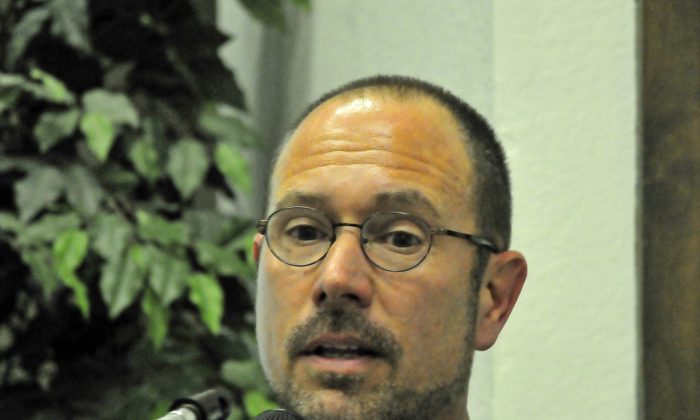 Dr. Greg Autry addressed the Taiwanese people about the economic tsunami brought about by economic ties to China and its effect on the United States labor markets. (Robin Kemker/Epoch Times)
Quitting the Chinese Communist Party

ROSEMEAD, Calif.—Greg Autry is a serial entrepreneur, writer, and educator. He publishes on business, economics, trade policy, China, and New Space. Autry’s research is focused on innovation policy and the influences of government on entrepreneurial environments. He has a regular blog on the Huffington Post.
Autry is a vocal critic of the Chinese Communist Party (CCP), of engaging state capitalism, and of appeasing totalitarian regimes. He is a passionate advocate for human rights and the American ideals of economic and individual liberty. Autry holds an MBA and Ph.D. from the Merage School of Business at University of California Irvine. Autry serves on the board of the American Jobs Alliance and as Senior Economist with the Coalition for a Prosperous America.Autry spoke this evening at the annual Friends of Taiwan meeting in Rosemead, Calif. Autry focused on American international trade policy anomalies and finished with an assessment of Taiwan’s possible future in light of the current CCP incursion into Hong Kong.

Détente refers to a process of reducing international stress between countries. Henry Kissinger promoted this principle broadly in engaging with communist dictatorships such as China and Russia.The United States has been repeating the same foreign engagement policies for decades. Unfortunately, according to Autry, it appears to have never learned any lessons from any of the prior failures. These failures, planned or unplanned, have been greased with promises of economic improvement for the engaged countries, both the United States and the target country. In the case of China, that failure came in the form of unimaginable job losses and is only now stabilizing. Fomenting the status-quo are problems such as currency manipulation, loss of valuable patents, trade secrets, growing trade deficits, and sustained unemployment.To date, it is not known how much secret technology was transferred to former East Bloc communist countries through this process. These have taken place through not only corporate espionage, but are anything goes when it comes to the Chinese technology vacuum cleaner via the World Wide Web.

Corporate Under the Table Perks

Generally unknown is how Soviet Russia received production-line technology from Ford to produce vehicles in 1928. Russia benefited in technical advances for military vehicles and other applications. Moving from an agrarian society to a fledgling industrial base was facilitated by such technology sharing, but it was not publicly known.Three years later in 1931, Ford built an automobile plant for Hitler in Germany. Mass production became a very important technology model for Germany’s war effort in Europe several years later.However, it is said that General Motors helped the Nazi effort far more by developing airplane engines for the Luftwaffe before the war.

In 1937, the Japanese were planning to acquire a Boeing bomber from the United States. The U.S. Army forbade the sale for a one-year period. Boeing offered them a “similar model.” Boeing then advised the Japanese that “they would be able to design and build a similar type of bombing plane, either independently or in conjunction with Japanese engineers, and would manufacture a certain specified number per year, or make one model plane selling the manufacturing rights for the style so designed…”According to a study in 1944, if the allies had done their homework by reviewing the cartel agreements from the 1930s, the United States would have had a more realistic view of the international military technology situation.These days, the CCP has mastered stealth theft of significant scientific and technological information. The world is the looser in this round. The death nail for the world is the emasculation of the United States military’s worldwide satellite military navigation system. It is the eyes and ears and a guidance platform for U.S. global military action. China is developing an anti-satellite missile system that could disable the entire U.S. response system.

Autry addressed a major concern of the Taiwanese people. The United States has an international agreement to safeguard Taiwan should China attempt to forcibly reclaim the island. However, the United States has been silent about safeguarding Taiwan for several years. The Taiwanese people are very concerned about this silence, especially with China’s saber rattling along the Pacific Rim and the recent Hong Kong takeover and loss of human rights. Autry could only advise them, “Keep pushing the U.S. government to keep their promises.” Regarding China Keeping their agreements, Autry said, “Just look at China’s constitution.”