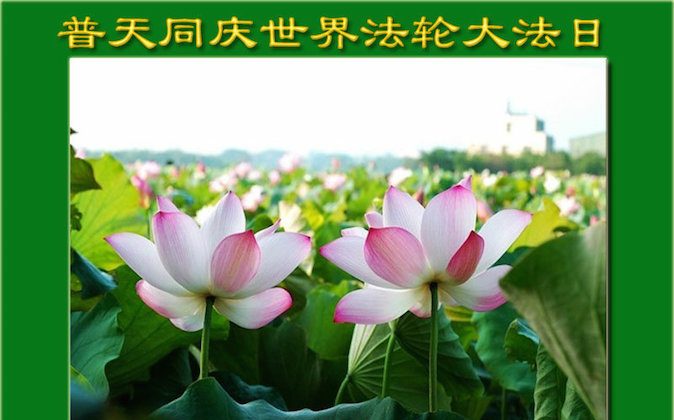 A graphical greeting card from China, published on the Minghui website, says, at the top: "All celebrate Falun Dafa Day." (Minghui.org)
China

Thousands of notes of greetings and celebration have streamed out from mainland China over the last few days, prepared by practitioners of Falun Gong, a popular, persecuted spiritual discipline, marking the occurrence of Falun Dafa Day on May 13, the date on which the practice was first taught to the public in 1992.

The greeting cards, many of them addressed to the founder of Falun Gong, Li Hongzhi, (whose birthday also falls on May 13) demonstrate how widespread the practice still is in China, despite 15 years of vilification and persecution by the communist authorities.

The card does not indicate how many staff there are Falun Gong practitioners, though military personnel were known to have openly adopted the practice before it was persecuted in 1999. Videos from some of the early Falun Gong lectures of Li Hongzhi show officers, in their military regalia, seated in the front rows of large auditoriums as he speaks.

Provenances of other cards include: a mother and her son working at the Shengli Oil Field, staff at a police office in Shaanxi Province, educators in Jiangsu Province, employees of the Nanjing Steel Corporation, workers at the state electricity grid, faculty of Tsinghua University in Beijing, and those at a number of other universities, among just a small sample.

Falun Gong is a traditional Chinese practice of meditation and moral discipline, with many of the same emphases as the teachings of Buddhism or Taoism.

It is likely that many of the individuals practicing Falun Gong in state-affiliated organizations have maintained their beliefs unknown to their colleagues and superiors, or else have persuaded them that the practice is wrongly persecuted.

In initiating the persecution of Falun Gong, Communist Party security forces offered cash payments to those willing to hand over to the authorities the identities of their colleagues who practiced Falun Gong. The victims would then be abducted by security agents and taken to ideological reprogramming centers, where they would be tortured and brainwashed.

Many more were the notes from China that came without a graphical card attached. Page after page on the Minghui website was filled with lists of these notes from around China, each page typically contained dozens of entries, collectively adding up to thousands of expressions of gratitude and celebration.