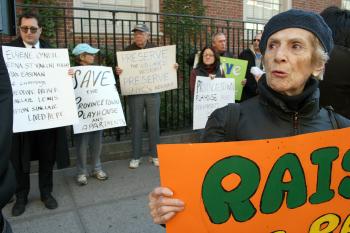 DEMOLITION STANDOFF: Activists protest the planned demolition of a beloved historic theatre, Provincetown Playhouse, in the Village on Monday. The building is owned by NYU, which plans to construct a new law school building on the site. (R) Emily Silver-Fabella Stevens, Producer, Director, Writer. (Katy Mantyk/Epoch Times)
US

NEW YORK—NYU is preparing to demolish the historic Provincetown Playhouse and Apartments. Dozens of protesters from the Greenwich Village community, NYU students, members of the Greenwich Village Society for Historic Preservation (GVSHP), and the Historic Districts Council on Monday spoke out in defense of the building, which is considered to be a cornerstone of the cultural history of the neighborhood.

The windows of the old theater and apartments at 133-139 MacDougal Street are now boarded up and scaffolding is in place. NYU is waiting for the final approval  from the City to go ahead with demolition. In its place will be new Law building.

After a huge public outcry this past spring when NYU proposed demolishing the entire building, they made a small compromise. What will be preserved are only the façade of a small portion of the site and the four interior walls of the theater space in the south corner of the building, equaling approximately six percent of the original.

“We’re here today to ask NYU to live up to it’s much publicized commitment and commendable pledges that it made, and hold off on raising these poor buildings,” said Jonathan Geballe, member of the South Village Historic District.

This development plan comes not long after NYU pledged to “prioritize… reuse before new development,” for all its new projects, and pledged to support landmark designation of this and surrounding buildings.

What is scaring these preservationists most though is that this is only one of many projects in NYU’s 25-year plan that would add between 3 and 3.6 million square feet of new space to the Village – the equivalent of approximately 80 more of the new Law School building which will replace the Provincetown Playhouse and apartments.

“NYU cannot continue to consume more and more of our neighborhood,” said Andrew Berman, Executive Director of GVSHP. He added that the Playhouse is officially worthy of being listed on the State and National Registers of Historic Places, and it would be if the owners, namely NYU, agreed to the listing.

Actor Tandy Cronyn, a second generation New York actor, echoed the sentiment that the theatre is needed in the community and that NYU needs to take a step back.

“I love education and I love NYU, but they’ve turned into a monster. It’s gone too far; it is just sucking up this neighborhood. Why can’t NYU students just get on a subway and go to a class in an adjacent neighborhood… this neighborhood actually needs this theater and we could make great use of it,” said Cronyn.

The inspiration drawn from the Playhouse and those famous literati’s, actors and artists and cultural luminary who came, lived, performed and wrote within its walls over its 180 year history is something deeply felt by many.

It’s not just that one building that shapes the historic Village. Just a block away is the little Caffe Reggio. Established in 1927, it was the home to the ‘original cappuccino’. The first owner bought over from Italy the newly invented espresso machine and the café and the coffee has been going strong since. Across the road from the café on MacDougal Street is a quaint three story brown stone that once housed Louisa Mary Alcott, Author of Little Women, and two blocks north is Washington Square Park that once served as the drilling ground and headquarters of General George Washington and his revolutionary army.

“Building by building, NYU is consuming the history and character of the South Village. First the Poe and Judson Houses were demolished for NYU’s law school and now the Provincetown Playhouse will be too. This is an assault on the cultural history and sprit of the Village and unless this destructive growth is stopped soon, all that will be left of this neighborhood will be photographs and fading memories,” said Simeon Bankoff, Executive Director of the Historic Council.

NYU president John Sexton did not respond in time for this article’s publication. Epoch Times wanted to know what the reasoning was behind demolition of the building, rather than renovating and reuse in light of their pledges to the community.