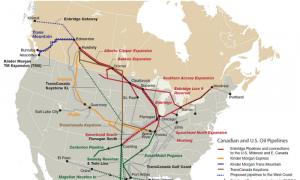 There's 14,000 Oil Spills Each Year in the US
0
Share Now
TelegramFacebookTweetEmailTellMeWeReddit
Copy Link 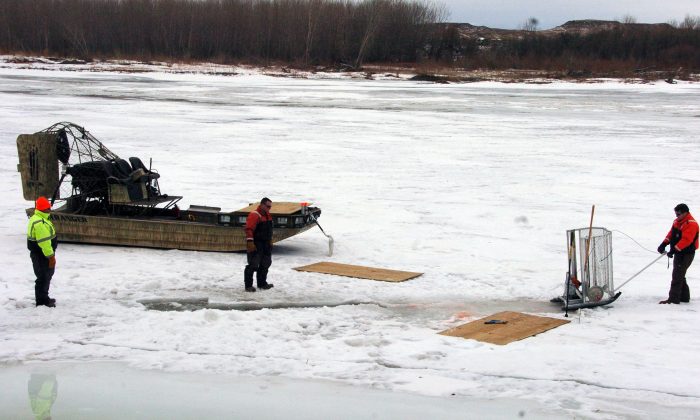 Cleanup workers cut holes into the ice on the Yellowstone River near Crane, Mont. on Monday, Jan. 19, 2015 as part of efforts to recover oil from an upstream pipeline spill that released up to 50,000 gallons of crude. (AP Photo/Matthew Brown)
US

The 50,000-gallon Poplar Pipeline oil spill near the Yellowstone River in Montana shows how dangerous oil pipelines are, said a Greenpeace researcher.

Jesse Coleman with the environmental group tells Epoch Times that the spill, which took place on Saturday near the Montana city of Glendive, “is yet another example of how dangerous oil pipelines like Keystone are to the communities that surround them.”

In a yearly update, the U.S. Environmental Protection Agency (EPA) said there’s more than 14,000 oil spills from pipelines and tankers of varying sizes across the United States each year.

Coleman notes the controversial Keystone XL pipeline extension would be three times larger than the 12-inch Poplar Pipeline. Portions of the proposed Keystone pipeline would be located near the Poplar line in Montana if it is completed.

[The Yellowstone River spill] is yet another example of how dangerous oil pipelines like Keystone are to the communities that surround them
— Jesse Coleman, researcher with Greenpeace

“Unfortunately, it is impossible to clean up an oil spill, and even harder to contain a spill of this magnitude that has contaminated drinking water supplies,” Coleman notes. “The icy conditions of the Yellowstone River this time of year make it even more impossible to respond to this spill.”

“Currently, the best in oil spill recovery technology can only recover 5.5 percent of spilled oil in icy conditions, and that is with technology that is not available in Montana. At this point there is nothing that can be done to clean the river past putting out some isolated booms and hauling away the contaminated soil from the banks,” he adds.

About 5,000 people in Glendive were told not to use the city’s water due to elevated levels of benezine, which is cancer-causing, that was found downstream from the oil spill.

Officials announced they were distributing fresh water via trucks. A warning was posted for residents of the city, telling them not to drink or cook with the water.

Workers recovered about 10,000 gallons of oil from a ruptured pipeline that spilled crude into the Yellowstone River and contaminated a Montana city’s drinking water.

An estimated 40,000 gallons is still in the river and will be difficult to extract because of a thick layer of ice.

The recovered oil was crude that was left over in the pipeline after the breach.

Bridger Pipeline Co. spokesman Bill Salvin said Wednesday only a “very small” amount of oil has been siphoned from the river itself. Company officials and government regulators say most of the oil is thought to be within the first several miles of the spill site.

“What we’re working on is identifying places where we can collect more oil,” Salvin said. “The cleanup could extend for a while.”