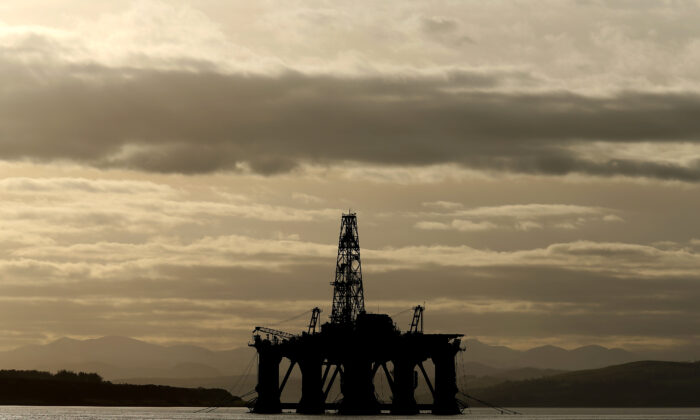 An oil platform stands amongst other rigs which have been left in the Cromarty Firth near Invergordon in the Highlands of Scotland, on Feb. 15, 2016. (Andrew Milligan/PA)
UK

Greenpeace has lost a legal bid to have the UK Government’s decision to allow BP to drill for oil at a field in the North Sea overturned.

The environmental campaign group took legal action at the Court of Session, Scotland’s highest civil court, calling for BP’s permit to drill the Vorlich field in 2018 to be revoked.

The oil field cost £230 million ($312 million) to develop and has now been operating for around nine months. Ceasing production would have cost around £5 million ($6.8 million) a month.

Greenpeace argued a “myriad of failures” in the public consultation exercise meant it was deprived of the opportunity to comment on the application for consent, and of a “clear, timely process for challenging the decisions.”

In his written judgment, Lord Carloway rejected these arguments, saying they were “overwhelmingly technical and unconvincing.”

He added there was “sufficient publicity of BP’s application to exploit the Vorlich field, the decisions to permit that development, and the availability of an appeal to the court to challenge that decision.”

He said Greenpeace, as a “leading environmental watchdog, ought to have been well aware of the legal mechanisms available in order to mount a challenge.”

The campaigners also argued that when the application for drilling consent was first issued they would have wanted to make representations on a number of issues, including the “failure to assess climate change and the impact of greenhouse gas emissions.”

Lord Carloway found consumption of oil and gas do not constitute “significant effects” of the project.

“It is the effect of the project, and its operation, that is to be considered and not that of the consumption of any retailed product ultimately emerging as a result of a refinement of the raw material,” he stated.

“It would not be practicable, in an assessment of the environmental effects of a project for the extraction of fossil fuels, for the decision maker to conduct a wide ranging examination into the effects, local, or global, of the use of that fuel by the final consumer.

“Although [Greenpeace’s] aspiration is for such extraction to cease, it does not appear to be contended that the UK economy is not still reliant in a number of different ways on the consumption of oil and gas.

“At present, a shortage of oil and gas supplies is a matter of public concern.

“The argument is, in any event, an academic one.

“It is not maintained that the exploitation of the Vorlich field would increase, or even maintain, the current level of consumption.

“Unless it did so, it is difficult to argue that it would have any material effect on climate change; even if it is possible to arrive at a figure for its contribution by arithmetical calculation relative to the production of oil and gas overall.

“The Secretary of State’s submission that these are matters for decision at a relatively high level of Government, rather than either by the court or in relation to one oilfield project, is correct. The issue is essentially a political and not a legal one.”

Greenpeace said it intends to appeal against the ruling in the Supreme Court.

John Sauven, Greenpeace UK executive director, said: “The Government is celebrating a win for the fossil fuel industry after its lawyers argued in court that emissions from burning oil extracted by BP are ‘not relevant’ when granting an oil permit.

“And now the Prime Minister is poised to sign off even more oil if he approves a new oil field at Cambo—against official guidance from climate experts.

“In just a few weeks’ time Boris Johnson will be opening global climate talks where his actions, not his words, will be what counts.

“And right now his actions are covered in oil.”