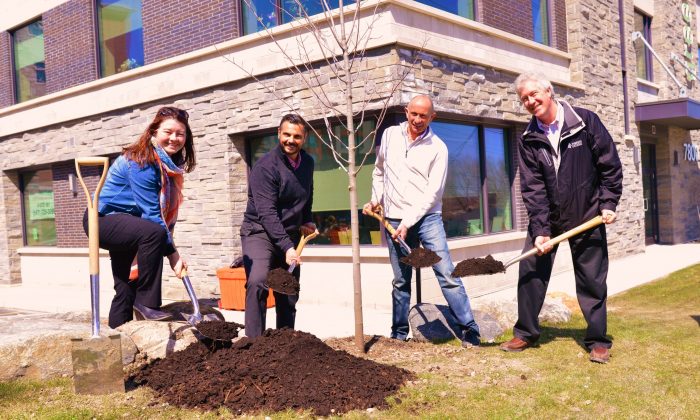 GreenLife East Markham II, the Net Zero Energy condo being built by Del Ridge Homes, will soon take the city by storm, promising energy savings that far exceed most condominiums’ in the Greater Toronto Area or anywhere else in Canada for that matter

The second phase of GEM, comprised of 261 units will launch sales on May 7, and units are expected to fly off the proverbial shelf. Del Ridge’s president, David De Sylva, told The Epoch Times that the first phase sold out in one day.

The appeal to living in a Net Zero Energy building goes beyond eco-consciousness; the savings are astronomical when juxtaposed with a regular built-to-code condominium. GreenLife East Markham II promises condo fees equaling $0.14 per square foot, whereas fees in traditional GTA condos are roughly $0.45 per square foot

The energy systems in GEM I and GEM II incorporate the latest technology. For example, the geothermal and cooling systems are four times more energy efficient than high efficient gas furnaces.

The building envelope is remarkably insulated, too, including R80 roofs in lieu of R20, and LED lighting is used throughout the condos.

GreenLife Building Systems is highly intricate and involves a multitude of systems that, when firing together, create some of the most environmentally-friendly buildings Ontario has ever seen.

That the eight-storey GreenLife East Markham condominiums – Del Ridge’s fourth Net Zero residential development—are being built in Markham—to say nothing of their investment potential—is a sure sign that the Chinese community has its sights set on the developments.

De Sylva says about 10 percent of GEM I buyers were Chinese but wouldn’t be surprised to see that number billow in light of the services Del Ridge will provide after occupancy. GreenLife Property Management is also under the Del Ridge umbrella, and its purpose is to teach residents how to maintain complexly energy-efficient buildings.

“We teach the condo owners how to maintain it in a sustainable way. The condominium hires us to manage the condo, so we collect all the fees and only spend the money where needed, and practice a lot of preventative measures,” said De Sylva, adding GreenLife Property Management turns over the reins to a building polity once it’s poised to take over.

The surplus energy created by the GEM buildings is sold to the electrical grid, and the profits are diverted to the buildings’ general funds, which also offset their monthly fees. Over the course of a 25-year mortgage, De Sylva estimates energy and condo fee savings to total more than $170,000.

“The initial cost is a lot less than other condos, but the operating cost is a lot less because the demand for energy is about one-fifth of a unit in another [built-to-code] building,” said David De Sylva. “Condo fees are about a third to a quarter of typical condo fees. We have low energy costs for the condo.”

Del Ridge is taking its green initiative two steps further, first by partnering with Nissan to incentivize its Nissan Leaf Electric Car, and secondly by entering a tree planting partnership with Forests Ontario.

Buyers receive discounts of $3,900 from Nissan, $3,100 from Del Ridge Homes and a $9,809 provincial discount towards the Leaf. This adds up to a total discount of $16,809 off the purchase of a Nissan LEAF with a MSRP of $32,698—resulting in a sale price after discounts of $15,889 or less than half the original price. There will also be onsite charging stations because Del Ridge longs for the day electric cars usurp their gas-guzzling counterparts.

“In addition to GreenLife Car Share (a car sharing program for the condominium), we wanted to make electric vehicles more affordable so that, ultimately, our buildings will have a lot of owners using electric vehicles,” said De Sylva.

Del Ridge and Forests Ontario are teaming up to combat atmospheric carbon with a tree-planting blitz, called GreenLife Woods. Trees, though the simplest, are the most effective method of sequestering atmospheric carbon.

Although the addition of trees will succor eco-conscious innovations like Net Zero Energy buildings, the tree-planting partnership between Forests Ontario and Del Ridge Homes is also allegorical of the latter’s commitment to the environment.

“By planting what will amount to hundreds of thousands of trees over the coming years, and by only building Net Zero now and in the future, we’re putting words into action,” said De Sylva.