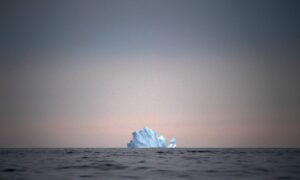 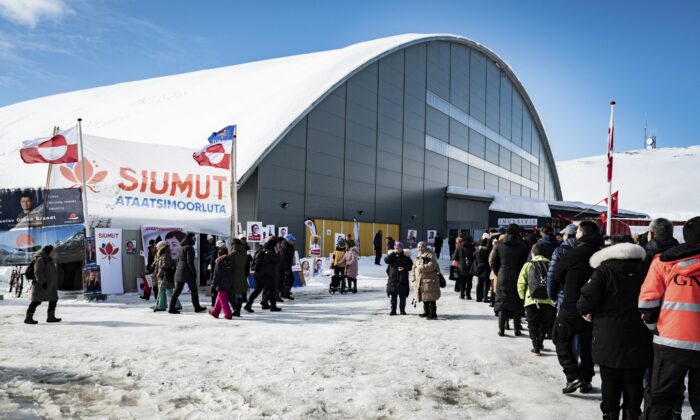 People line up to vote in the Inussivik arena in Nuuk, Greenland, on April 6, 2021. (Emil Helms/Ritzau Scanpix via AP)
Viewpoints 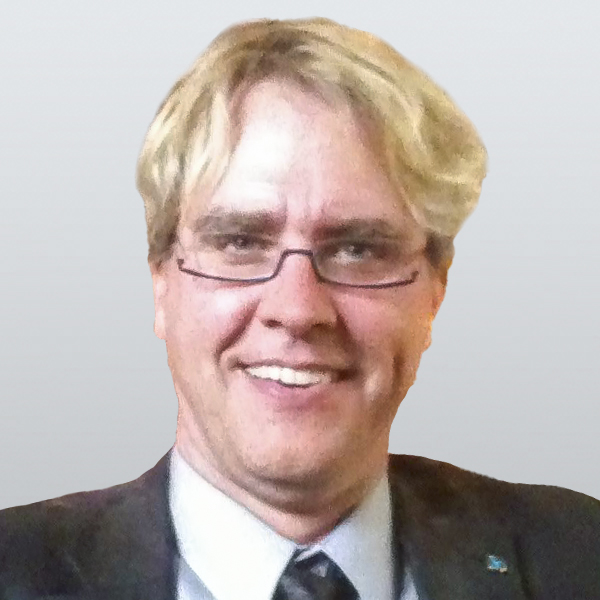 This month there was an unusual amount of international attention given to the Greenland election. This is a vast country with a tiny population of only about 57,000.

Every year, Denmark, which has sovereignty over Greenland, transfers the equivalent of US$740 million to help fund the Greenland government. This is a huge amount of money—representing about 25 percent of GDP or 46 percent of government spending. Amazingly, government spending equals 60 percent of its economy. The money received from Denmark has been crucial to Greenland being brought into the modern world in terms of living standards, education, health care, housing, life expectancy, etc.

The election became globally important as an international mining consortium wants to develop a rare-earth mine in the country—which is opposed by some of the local people. Inuit people make up 90 percent of the local population. The election result saw the overturning of the ruling party—with 37 percent of the votes going to the winning anti-mining party, who will no doubt stop the development of this mine.

The Danish government was hoping that the mine’s development would allow it to reduce its ongoing financial subsidies to Greenland; however, the people of Greenland decided against it. They expect that Denmark will continue to foot the bill for nearly half of government expenses.

The question has to be asked—if the people of Greenland are being subsidized to the tune of 25 percent of their entire economy—what is the need to become self-sufficient and engage in an environmentally challenging project? Every family in Greenland sees US$50,000 transferred to them by the Danish government. Why would they have any desire to change that—develop a mine—and see the risks associated with a major project?

It’s far easier to simply keep accepting US$740 million every year. This is the classic welfare trap on steroids. If the Danish government now decides to end this large transfer payment, and government services are slashed by 46 percent, there’s a strong likelihood that Greenlanders may want to rethink their support for this mine—to pay for much-needed services.

Unfortunately, we see the same perverse incentives operating throughout Canada. We see transfer payments to provinces, which involve complicated formulas on natural resources, conveniently leaving out true electricity costs—thereby ensuring that Quebec remains a permanent beneficiary of large amounts of transfers (receiving substantial parts of its budget from other parts of the country as equalization payments).

Like other equalization-receiving provinces, Quebec operates a higher-cost provincial government—particularly compared to its neighbouring province, Ontario, never having to face the challenge of actually paying the artificially inflated costs of services that it provides. There’s no evidence that these transfer payments have resulted in services that are better than those in other provinces—and for the most part, the equalization-receiving provinces lag behind national averages in education and health-care outcomes.

In the Maritimes, not only do we see large cost-inflating equalization payments, but we also see EI payments, which effectively pay people to stay at home, after they’ve spent six weeks fishing. Why get another job—when they can collect “poggy” for 44 weeks of the year? It has stymied economic development in that region for generations, as companies can’t find workers despite locally high unemployment rates.

In rural Canada, we have seen hundreds of small towns wind up—with locals moving where they can obtain better economic and lifestyle opportunities. We now see 60 percent of our First Nations living off-reserve, a number that keeps rising every year. Despite most reserves remaining non-economically viable, with growing numbers of First Nations people now living off-reserve, none of the more than 630 First Nations have been merged or wound down.

Approximately two-thirds of First Nations reserves are under 500 people. Economic opportunities, health care, and education are not possible for a First Nation of 300 people, living in a remote area, only accessible by air or winter roads. No matter how much goodwill or money a government provides, it’s impossible for such a community to meet acceptable standards of health, education, and employment in a modern context. As long as government funds these satrapies, chiefs, and councils—there’s no economic impetus to change.

Canada is a rich country, with the majority of investment directed toward resource development. If we continue to subsidize areas that are non-economic, the standard of living in our country will continue to erode. We constantly hear from new generations of Canadians that they’ll be the first generation in Canada whose incomes will be less than their parents.

If we’re unable to make hard decisions about resource development, and divert funds to permanent welfare traps caused by non-economic programs and systems of government, then the standard of living for new generations of Canadians will continue to diminish.

Peter Holle is president of the Frontier Centre for Public Policy.