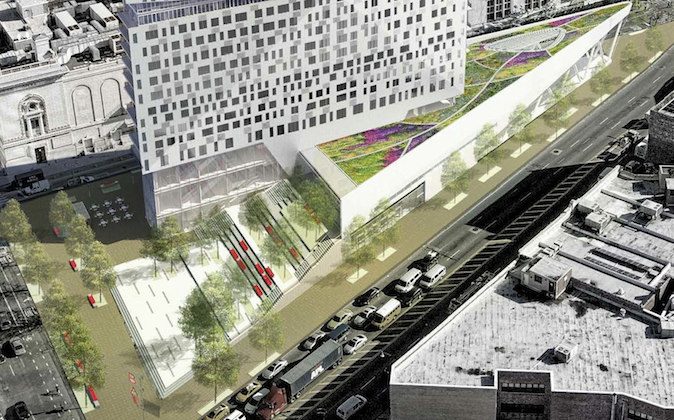 New York City’s Department of Environmental Protection (DEP) announced last week it spent $3 million to fund local projects that will reduce stormwater runoff. The projects are part of a larger plan that could save taxpayers billions of dollars over the next 15 years, according to a DEP spokesperson.

“It’s the most cost-effective way of cleaning the environment, clearing the rain-water and avoiding sewage overflow,” said Mercedes Padilla, with the Communications & Intergovernmental Affairs department at DEP.

The problem with New York City’s outdated, existing sewage system is that it shares the same pipe space as stormwater drainage. When it rains heavily, the system often overflows, pumping sewage and debris into the rivers.

To address this, the DEP started the Green Infrastructure Plan in 2010. It promotes the natural movement of water by building and maintaining a series of sustainable water systems across the city. These include green roofs, rain gardens, and constructed wetlands.

The DEP plans to spend $1.5 billion on projects like these over the next 15 years. They will reduce stress on New York City’s water pipes and treatment plants, ultimately saving money.

The Green Infrastructure Grant Program offers grants to organizations in areas where excessive stormwater runoff is a problem. The most recent projects include a series of rooftop and ground-level gardens in Queens, the Bronx, and Brooklyn.

One project in particular is the Paradise on Earth Community Garden in the Morrisania and Melrose neighborhoods in the Bronx. Run by the New York Restoration Project, the garden will use the money to modernize existing garden features to filter and reduce stormwater flows. The garden will mostly be used for environmental education, hosting local cultural and artistic events, supporting urban agriculture, and providing a green oasis for the community.

The Green Infrastructure projects aim to replace a previous method of addressing runoff: stormwater detention tanks. Those are giant tanks placed underground to contain the stormwater overflow. The water is then slowly released over time at a more natural pace.

In contrast, said Padilla, a garden or green rooftop not only reduces runoff, but also “helps property values, cleans the air, and beautifies the neighborhoods.”