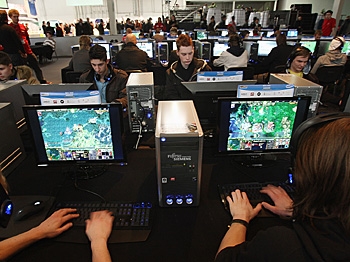 How Green Is Video Gaming?

By Paul Darin
Print
The video game industry has grown considerably since the days of Atari and Pac-Man. Many people criticize the world of gaming on the basis that they turn our children obese, or that the games are too violent, etc. These claims may or may not be true.

But, let’s say that you are concerned about living green, but at the same time, you, your children or your/their friends like to play video games. Maybe you have wondered just how green video game playing can be.

One way to measure the greenness of video games is to determine the energy efficiency of each of the popular gaming consoles on the market today. The three primary video game consoles are Microsoft’s X-box 360, Sony’s Playstation 3, and Nintendo’s Wii console. Each is available at any local retailer in the U.S. and each consumes different wattages of power.

Microsoft’s X-box 360 console uses, on average, about 177 watts of electricity during game play. Each video game console is unique in its own way, and the 360’s appeal to the gaming community is the popularity of the title’s it hosts. Such titles as Halo 3, Fable 2, and Mass Effect are very popular and only available on this console.

Microsoft has also been a pioneer in the ability to play with other players over a high-speed Internet connection (only available on certain titles). So, anyone interested in living green and playing modern video games needs to weigh the energy efficiency with console features.

The 360 also has a backwards compatibility feature, or the ability to play most original X-box titles. So, is the 177 watts worth it? Well, let’s take a look at the other two systems and you can decide.

Sony’s Playstation 3 uses the most power. On average it eats up a whopping 186 watts of electricity.

But, the Playstation 3 also has the ability to play Blue-Ray movies. Blue-Rays are a new format of movie viewing which supports High Definition video playback. However, it may be possible to find a Blue-Ray player which consumes less power.

The graphics of the Playstation 3 and the 360 seem to be on par with each other right now. According the tech specs of the Playstation 3, using the highly sophisticated cell processor, it has the top graphics processing ability currently available. However, Microsoft has used graphics updates on various titles such as Oblivion to make them indistinguishable between the two consoles.

The Wii also uses an innovative motion-sensitive user interface. In other words, instead of the typical console controller where a user interacts with the game via pressing a series of buttons on the controller, the user of the Wii uses a special remote to interact with the game by following through with the motions of the character on the screen, thus making the Wii very popular among all ages.

The major drawback of the Wii is the lower scale of graphics it produces; it is around the same level of the last generation of video games consoles.

For those interested in computer games, many computers have been energy-star rated. However, with the vast array of computers on the market, selecting a suitable gaming computer is a task in and of itself. So, if one can not get away from using a computer due to one’s occupation, buying an energy-star rated computer and using it to quench one’s thirst for a good video game now and then, computer video game playing may be a better option than purchasing another electronic component that will take up space and consume energy. However, games released for computers aren’t as abundant as those released for the consoles. Usually only the very popular titles make it to computer. Also, computers can differ in wattage depending on the brand and model of the computer.

In terms of the main video game consoles on the market today, Nintendo’s Wii, which consumes far less electricity, stand above the rest as the best choice for green video-game playing, while still enjoying the family-friendly atmosphere their games have to offer.

The Wii is also the most physically active for those who demand more interactivity in their games with many games that provide physical fitness programs.