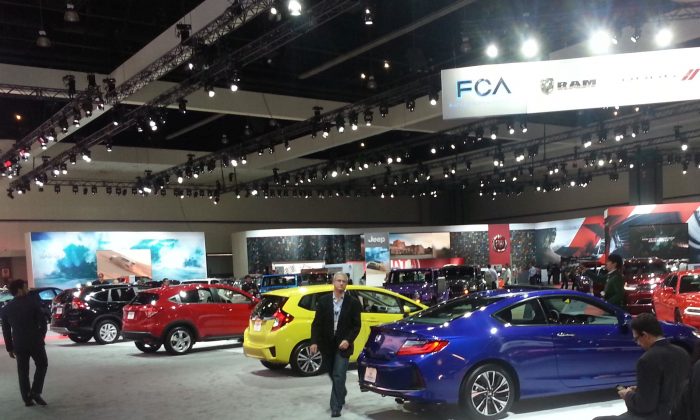 The future arrived with a blend of quirkiness and novel twists at the 2016 Auto Show at the Los Angeles Convention Center, which concluded Nov. 29. From shapely models that had nothing to do with cars but a lot to do with the age-old notion that sex sells, to a field of cars with bodies and accoutrements to die for, and futuristic technology whose time has come, made seeing all the offerings in the cavernous 720,000 square-foot Convention Center in one day virtually impossible.

Brilliant colors are a certainty to brighten up the roadways in 2016. Some might say they are of the variety found in a child’s nursery. At least it’s an alternative to commonplace drab hues of today. Many 2016s are two-toned, and, notably, have dazzling trim and interior colors—described as “pop-out” by a Nissan representative. Generally, changed body designs, combined with a fancy new color swatch, underscore the adage that beauty is in the eye of the beholder.

One thing the auto show was not: any hint of the “good old days” of a basic mode of transportation to get from Point A to Point B. Plainly if not also painfully obvious—especially to “old-timers”—was that long-gone are mechanics—or “grease monkeys”—with a wrench to tend to cars. And hardly was this event for do-it-yourselfers. Instead, advanced-degreed-technicians with computer know-how have the edge by keeping us drivers in a state of not knowing why or how the apparatus at our control ticks.

What added to the seemingly field-of-dreams madness at the Convention Center were unfathomable contraptions, such as a customized novelty by Mercedes-Benz, which may have cornered every convenience under the sun for the “kid who has everything.”

For years, automakers have not been content in just honing in on the niche market associated with their brand. Upscale carmakers known for luxury sedans and sport cars, like Mercedes-Benz and Porsche, presented a lineup of SUVs, and even the tiny Fiats and Mini-Coopers are not so small anymore. It doesn’t take a genius to figure out the American appetite for things big and roomy.

Such a collection of electric, hybrid, and fuel-cell cars under one roof, along with technological accessories and aftermarket add-ons, were remindful of the warnings of Alvin Tofler in his seminal 1970 book “Future Shock,” which forecast that “too much technological change in too short a period of time” would inevitably lead to a “shattering stress and disorientation.”

Comers got an eyeful of alternative-fueled modes on America’s roadways of tomorrow. Set in “car-centric LA,” a term by Green Car Journal founder Ron Cogan, where motor vehicles outnumber inhabitants, the auto show experience could have been akin to a child’s unharnessed foray inside a candy store. There was so much to see and hardly was there time to gobble up the automotive advances in one day.

In addition to self-driving, or autonomous, vehicles, which were unveiled next door at the J.W. Marriot, electric ones were the focus of an EV organization called ROEV. At a press breakfast, this collaboration of industry stakeholders to support electric vehicle infrastructure announced objectives to facilitate the growth of public charging stations throughout the nation.

“Driving an EV will be easier thanks to ROEV,” said Simon Lonsdale, Chair of the Board of ROEV, who predicted that “the day isn’t too far off” that electric cars will be as common as gasoline cars.

This would sit well with would-be Tesla drivers, notably the “S” model, which comes with a promise of lifetime free recharging. Prospective-buyer complaints centered on the lack of recharging infrastructure, an obstacle ROEV is working on.

One of the more talked about cars was the Mirai, a Toyota product, which means “future” in Japanese. This much-heralded fuel-cell car with a range of 300 miles runs on hydrogen and its emissions are water. But in spite of its affability to the environment, a fill up can cost as much or more than regular gasoline, which hardly presents a buying incentive, let alone finding a place to refuel.

As environmentally friendly technologies are in vogue, the 2016 Green Car of the Year award, announced by Green Car Journal, went to the hybrid Chevrolet Volt. The result may be attributed to the Volt being a hot vehicle for visitors at the show to test drive.

The 2016 Los Angeles Auto Show put motor vehicle trends front and center in spite of the “fun things” or “distractions,” as a visitor put it. There was no mistake that stylistic changes never before seen on automobiles, and incomprehensible, continual one-upping technology has pushed the envelope to the point of one asking, again, “what next?” The only clear answer is that car design and automotive technology are limited only by imagination.