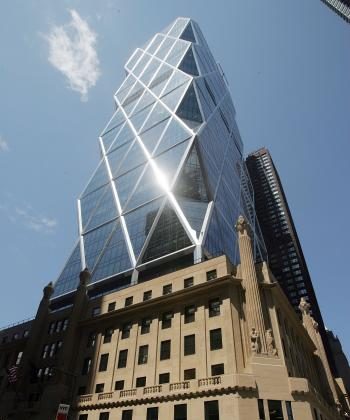 SILVER AND GREEN: The Hearst Tower in 2006. The building is rated Silver in the Leadership in Energy and Environmental Design award system, below Gold and Platinum. (Mario Tama/Getty Images)
US

NEW YORK—Today we have 400 times more electric light in our buildings than we did a century ago and our eyes are not 400 times worse, said Kevin Kampschroer, acting director of the Office of Federal High-Performance Green Buildings of the U.S. General Services Administration (GSA).

“What has happened, actually, was we created this wonderful cheap source of light called fluorescent tube and decided, in the enthusiastic way that Americans can, "If a little light is good, a lot of light is a whole lot better,’” Kampschroer said at the McGraw-Hill Green Retrofit conference in New York on Wednesday.

“The result is that we are using way more light than we really need.”

Kampschroer stressed lighting as one of the key elements in addressing the carbon-hungry buildings in the United States. Eighty percent of New York City’s carbon footprint comes from energy consumed in buildings, according to City Council estimates.

"Lighting technology from the past five years alone could save an additional 30 percent from current lighting expenditures," Kampschroer said, calling lighting and plugload use “vampires” for electricity.

Of the $5.55 billion in federal stimulus funding earmarked for the GSA, $4.5 billion is going toward existing buildings. So far, 43 projects have been selected. One, a federal building in Portland, Oregon, was built in 1975 and has never been upgraded. The building will get $133 million of the stimulus money to give it a full "green" overhaul.

The GSA has so far spent roughly $1.4 billion of its stimulus funding, Kampschroer said.

The case for retrofitting existing buildings is clear, said Congressman Peter Welch (D-Vt.) via video to the audience. “The most compelling case for retrofitting is the pocketbook argument,” he said. The jobs created by energy efficiency are also a bonus, as they are local jobs that stay in local communities."

Energy efficiency in New York City is all about retrofitting existing buildings, said Rohit T. Aggarwala, director of the Office of Long-term Planning and Sustainability in the mayor’s Office of Operations. New York City spends $15 to $20 billion a year on energy—making it one of the highest energy-consuming cities in the country, he said.

“We have to address existing buildings because New York is a built city,” Aggarwala said. “Eighty-five percent of the square footage that New York City will have in 2050 we already have today.”

He said the old answer of going into minority neighborhoods and building more and more power plants does not work anymore. “Now we have to think of energy efficiency as a growth solution. It is absolutely imperative.

"The mayor's 2030 PlaNYC program, aimed at creating a sustainable New York, has 127 initiatives, the most important of which is the existing building retrofit,” Aggarwala said.

The biggest impact on buildings in New York is the Greater, Greener Buildings plan that was introduced in April this year.

The plan means buildings will be required to meet the energy code whenever renovations are made—currently, there is a loophole that allows minor renovations to skirt the code. Lighting in commercial buildings of 50,000 sq. ft. or more will have to be upgraded to more energy-efficient systems that pay for themselves through energy savings.

Such large buildings will have to undergo an energy audit every 10 years and make any improvements that could pay for themselves within five years' time.

All buildings of 50,000 sq. ft. or more will be given an energy efficiency rating. The rating will take into account water and heating on an annual basis and is designed to help owners and potential buyers examine the health of the building and prioritize work.

“There are a number of new frontiers that we have to cross as some stage,” Aggarwala said. “How do we change the habits of the commercial tenants?”