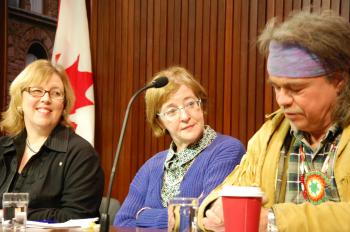 Green Party leader Elizabeth May, Maude Barlow, national chairperson of the Council of Canadians and senior adviser on water to the President of the UN General Assembly, and environmental activist Danny Beaton from the Mohawk Nation, speak at a press conf (Douglas Glynn)
US

In the ongoing fight to stop Dumpsite 41, Green Party leader Elizabeth May joined Maude Barlow, national chairperson of the Council of Canadians, and environmental activist Danny Beaton from the Mohawk Nation, at a press conference at Queen’s Park last Thursday.

Pollution from Site 41, a landfill slated to be built in Simcoe County, Ontario, directly on top of one of the world's cleanest aquifers, could contaminate the aquifer and ultimately Georgian Bay, says the group Stop Dumpsite 41.

"Eliminating and recycling waste may be a challenge for Canadians, but it is a challenge we can solve.  The Green Party supports “Stop Dump Site 41” supporters in their pursuit of a sustainable solution," said May in a news release.

The press conference will highlight the launching of a Stop Dump Site 41 facebook petition to the Hon. Dalton McGuinty, Premier of Ontario, and Ontario Minister of Environment John Gerretson.

“I am now reaching out to the world to stop the assault on our sacred surface springs of Georgian Bay,” said Beaton, creator of the petition which can be found at www.thepetitionsite.com/1/stop-dump-site-41 .

Dr. William Shotyk, a geochemistry professor at the University of Heidelberg in Germany, has called water from the Alliston aquifer “the best water on earth.” Shotyk, whose family owns property near Dumpsite 41, came to that conclusion after testing the water in a sophisticated laboratory he runs at the university to analyze contaminants in prehistoric ice.

“Our supply of clean water is finite. Our supply of garbage does not have to be infinite.  There are better solutions to our waste problems than digging holes in the ground,” said May. The fight to stop the landfill started over 30 years ago.