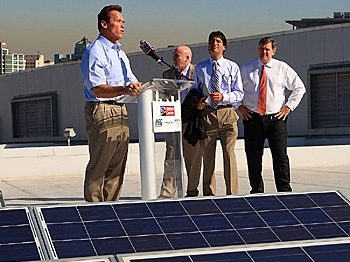 California Gov. Arnold Schwarzenegger speaks at a news conference for the installation the last of 1,727 solar panels on the rooftop of the Staples Center sports complex in Los Angeles, California. Despite such promotions, the green energy industry in Ame (David McNew/Getty Images)
Business & Markets

Heide B. Malhotra
View profile
Follow
biggersmaller
Print
WASHINGTON—More than 2 million Americans applied for unemployment insurance during 2008, the highest annual level since 2002, according to U.S. Department of Labor Statistics.

The Obama administration is scrambling to find new employment opportunities for the nation’s unemployed.

Green jobs are expected to open new employment opportunities for American workers of all levels and add about 2 million new jobs over the next two years, more than 3.5 million jobs by 2018 and more than 4.2 million jobs by 2008, according to a study released by the Natural Resources Defense Council (NRDC).

The American Solar Energy Society goes even further and suggests 37 million new green jobs for all Americans and 613,000 in Colorado alone should be available by 2030, according to a 182-page study released last December.

“Green jobs are not just a short-term fix for the recession,” according to a new study by Good Jobs First, a national policy resource center based in Washington. “Increasingly, these jobs are understood as central to the future of our nation and our planet. The shift to a green economy creates an unparalleled opportunity to address not only unemployment and the climate crisis but also deeply rooted social problems such as poverty and inequality.”

Currently, manufacturers producing or installing environmentally beneficial products, such as wind and solar equipment, have below-market pay and benefits.

Many American workers employed at recycling processing plants and green manufacturers are underpaid compared to other firms in the manufacturing industry, according to surveys. Hourly wages of $9.25 ($19,240 per year) and $11 ($22,880 per year) can barely cover daily expenses.

Employees in the wind and solar industries received "below the national average for workers employed in the durable goods manufacturing industry, and have to scrounge and live more than frugally to survive,” according to the Goods Jobs First study.

The researchers suggest that, "environmental sustainability will be difficult or impossible to achieve if it does not go in hand with economic sustainability for workers and their families… We cannot depend solely on the benevolence of green employers or the mechanisms of the labor market to provide the kind of quality green jobs."

The researcher said that without government help firms in the green industry cannot achieve profitability and pay their employees at market value.

The wind and solar industry is also notorious for outsourcing American jobs abroad.

Leading solar panel manufacturer First Solar Inc. is one of the largest solar module manufacturers in Malaysia. Its Malaysian plant is "more than ten times the size of the company's facilities in Perrysburg, Ohio," according to the aforementioned study.

Last year, Policy Matters Ohio, a not-for-profit research organization, published a report showing that many of the energy-saving compact fluorescent light bulbs sold in the United States by GE were produced at a notorious sweatshop in China. The plant, a joint venture of GE and Xiamen Topstar Lighting Co. Ltd., was “found to be violating Chinese laws on maximum hours and overtime pay as well as other labor regulations," according to Goods Jobs First.

According to reports, hiring “union-busting” consultants to discourage workers from joining unions are not unheard of in a number of green companies and green construction projects.

At the Cedar Rapids, Iowa-based Clipper Turbine Works, Inc. more than 70 percent of the blue-collar workers signed up for union membership.

“The tide turned when Clipper mounted what Brian Heins, lead organizer at the IBEW (International Brotherhood of Electrical Workers) calls an aggressive response to the organizing drive that included the hiring of a union-busting consultants and mandatory ‘captive audience’ meetings during which employees were regularly exposed to anti-union messages,” alleged the Good Jobs First report.

Spanish-owned Gamesa Corporacion Tecnologica manufactures wind turbines at a plant in Langhome, Pa. The company "is widely regarded as a model employer for the emerging U.S. green economy," and has negotiated with the United Steelworkers union contracts at both of its facilities, the report stated. Sharp Electronics Corporation is another plant that opened its doors to union labor.

Subsidies are the mainstay of many companies operating in the green sector. Direct tax breaks and many other economic development subsidies from local or state governments loans and grants for green energy projects are part of the American Recovery and Reinvestment Act of 2009 that passed both the U.S. House and Senate.