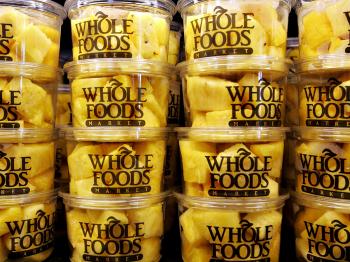 “We hope these trends are an indication that the level of ‘trading down’ might be easing somewhat,” the company said in a conference call with analysts.

Indeed, the most positive news for Whole Foods is that shoppers may be coming back to its stores after severely cutting spending during the first several months of the current recession.

During that span, many customers switched to grocers at lower price points. Whole Foods sought to cut costs and focused marketing efforts on lower priced items.

“While on a local level we watch our pricing against our major competitors in every market, we are also benchmarking our pricing versus key national and strong regional competitors in 11 metro areas on a comprehensive market basket representing perishable, branded and exclusive brand items across the store,” John Mackey, Whole Foods CEO, said on the conference call. “Our studies show we are responding to the current rapidly changing pricing environment and are competitively priced on these items.”

Whole Foods saw its same-store sales increase for the first time in over six quarters. Same-store sales is a retail industry metric that compares sales at stores that have been open for more than a year.

But the company is looking to get back to its roots as a grocer of choice for those looking for healthier and organic foods. Mackey said in an interview with the Wall Street Journal this week that Whole Foods would launch a “healthy eating” initiative with live cooking demonstrations and healthy recipes.

The company is also planning to launch an initiative to promote weight loss among employees—those who hit weight loss target, quit smoking, or improve cholesterol amounts would be eligible for a deeper employee discount.

“We believe continuing to raise the bar reinforces our authority and authenticity, making us the choice for customers aspiring to a healthier lifestyle,” Mackey said on the call.

“We have a policy that our 365 private label has to match Trader Joe’s prices, unless there is a significant difference in quality, in which case it probably shouldn’t be a 365 product,” Mackey said in the interview.

The company plans to open 53 new stores in eight new markets over the next four years.