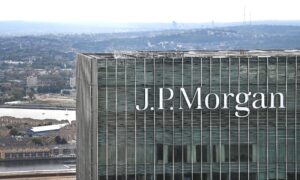 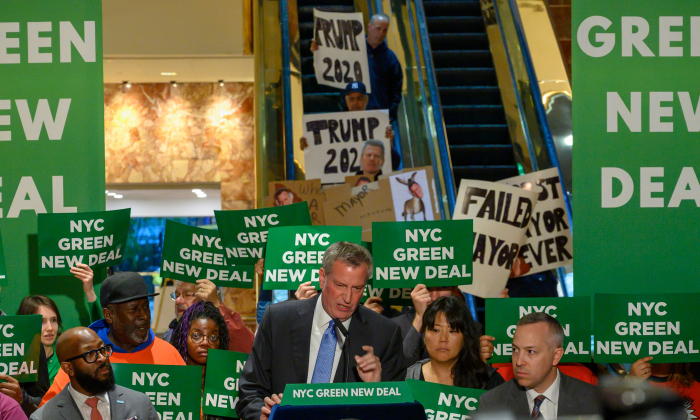 Green Energy Is Politics, Not Science

Green energy is prevalent in the United States and Europe, accompanied by ultra-leftist and socialist lines. They are taking advantage of some so-called harm caused by extreme climate and Earth changes.

The environmental policies aren’t based on science, but politics of redistributing social power and wealth.

In some parts of the United States, people are witnessing a so-called green energy revolution.

Some people compare this green energy revolution to the Great Leap Forward in mainland China 60 years ago. The Chinese Communist Party (CCP)’s Great Leap Forward launched by Mao Zedong, the then-leader of the CCP, led to the starvation of tens of millions of people.

Take a closer look at the U.S. clean energy plan, and you will see much of it is connected with leftist proposals such as the “Green New Deal.” In 2019, New York state announced the most aggressive climate goal in the United States—the Climate Leadership and Community Protection Act (CLCPA), which set the state to use carbon-free electricity and all buildings to use new clean heating and cooling technologies by 2040 and to achieve net-zero carbon emissions by 2050. It’s now urging the state legislature to pass a bill called the “Climate and Community Investment Act” (CCIA) before the summer recess to implement a super stimulus Great Leap Forward through the collection of carbon taxes and gas prices.

But can they really prevent hurricanes and other climate catastrophes? It all depends on the real results to see whether it’s effective.

Roger Caiazza is a meteorologist who has been working in the air-quality industry for more than 40 years. He has noted in his blog that spending huge amounts of money to subsidize wind and solar energy and imposing more restrictions on economic development could only, at most, drop the temperature by 0.0097 degrees Celsius in 2100. The most important thing is that even climate science can’t confirm whether global warming is man-made.

Caiazza regularly writes on his blog and offers an analysis of the provisions of the CCIA.

He said that “the underlying premise in all the New York legislative and regulatory initiatives is that there is a climate crisis” and that “the politicians and regulators who prepare the rationales that climate change needs to be addressed frequently confuse weather and climate.”

Caiazza mentioned the opinions of Dr. William Briggs, who is a writer, philosopher, and itinerant scientist. Briggs claimed that attributing extreme weather to man-made global warming is an estimate and that it is “impossible to independently check that estimate,” Caiazza wrote.

The primary tool used today to estimate human effect is a climate model. However, as Briggs said, “they [climate models] first have to demonstrate forecast skill,” and “if they can’t, or they are inaccurate, they can’t be trusted.” Briggs came to the conclusion that “climate-change event attribution studies rely on all these kinds of guesses and claims. As such, they are either incorrect or are far too certain,” Caiazza wrote in his blog.

The National Oceanic and Atmospheric Administration (NOAA)’s Geophysical Fluid Dynamics Laboratory in Princeton, New Jersey, has concluded “that it is premature to conclude with high confidence that increasing atmospheric greenhouse gas concentrations from human activities have had a detectable impact on Atlantic basin hurricane activity, although increasing greenhouse gases are strongly linked to global warming.”

For example, New York state’s green energy legislation often cites the impact of hurricanes on New York. The city has been affected by several hurricanes in recent years, which have been used as “evidence” of climate change. However, the data actually shows the opposite result.

University of Colorado professor and climate expert Roger Pielke claimed that the number of hurricane landfalls has been declining since the early 1960s.

Therefore, Caiazza believes that the so-called “risks associated with climate change are nonexistent [and] so reducing greenhouse gas emissions will have no effect.” On the contrary, reducing greenhouse gases will inevitably increase the energy costs, and disadvantaged communities would feel the impact. Caiazza argues that “any money spent on mitigation is not going to affect impacts.” He has estimated New York’s plan and found that by 2100, CLCPA’s emission inventory can reduce the climate warming range by about 0.0097 to 0.0081 degrees Celsius, which is less than one-hundredth of a degree Celsius.

In fact, the temperature of the Earth isn’t always constant. From the perspective of the Earth’s history, there have been three major ice ages in the billion-year history of the planet, and the current temperature is much lower than in other periods. The most recent glacial cycle is the Quaternary glaciation, which continues to this day.

During the Great Ice Age, there was also a Little Ice Age, and there was a small interglacial period between the Little Ice Age. It seems very complicated, but to put it in plain words, it’s sometimes cold and sometimes hot. The Earth is now in a small interglacial period in the middle of the Great Ice Age, which is a common saying in the Earth science community. This is to say that, like in winter, it’s warm on the days when the sun comes out, even though the climate is cold.

Even if the temperature rises, is it necessarily a bad thing?

Based on the history of the development of human society in the global climate change cycle, the global minimum interglacial period is the most suitable period for the prosperity of human society, according to a study by Kenneth Jinghwa Hsu, a Chinese scientist and former chairman of the Department of Earth Science at the Swiss Federal Institute of Technology (ETH Zürich). The Little Ice Age led to reduced agricultural production, famines, and ethnic migration. In other words, a warming climate will be much better for mankind; if the climate is cold, there will be more disasters.

Hsu believes that during the 200 years from the 15th to the 17th centuries, there were frequent strong earthquakes around the world, and other natural disasters were also locally concentrated.

But, why does the Earth’s temperature change? Hsu believes that during the Maunder Minimum period between 1645 to 1715, there was low sunspot activity, which was most likely the cause of the Little Ice Age climate.

The progress of human civilization can also be seen as progress of energy utilization. The earliest human beings started to use fire, then there was the development of tools after the so-called Neolithic period, and only after the use of coal did machines emerge, and when oil was used, it entered a new era. The human being’s pursuit and development of new energy sources will not stop, and the next generation of energy sources will most likely be nuclear energy, rather than solar and wind energy.

Most of the solar panels and batteries used in the United States and Europe are purchased from mainland China. European countries and America may feel clean, without any pollution. But the pollution is in mainland China, mainly in western Inner Mongolia and Xinjiang. The pollution is actually still left behind on the Earth. Carbon emissions also remain on the Earth. Does this help change the climate?

Apart from the production, there is also waste disposal. Be it the solar panel or the battery, the life span is only about 10 years, and then it will be replaced by a new one. How will these old panels and batteries be dealt with? Taking China as an example, experts believe that the number of various waste batteries will increase by 80 to 100 times in the next 10 years. How will these highly polluting wastes be disposed of?

Is the value created by new energy sufficient to solve these problems and bring more benefits to mankind? Many experts have been arguing for a long time. But in fact, this issue is not so much an economic and scientific issue, but sometimes it is more like a political issue, because the core behind the changes in energy usage and the energy system is a major change in wealth, interests, and dominance.

In the United States, leftists have been hostile to the oil industry for a long time, starting from the time of John D. Rockefeller. In fact, it’s the same in other countries. Oil companies are a symbol of capitalism. Reducing the importance of the oil industry in GDP, preferably by finding new technologies to replace it, is very attractive to the left, and it destroys capitalism.

As a result, local governments falsified reports on agricultural output, producing tens of thousands of jin (half a kilogram) per mu, a Chinese unit of area that is equal to one-sixth of an acre. Many people doubted the rationality of this output. Qian Xuesen, a top scientist, wrote an article in the People’s Daily in 1958, claiming that if 30 percent of the energy of sunlight per mu can be used, plus enough water and fertilizer, 40,000 jin per mu wouldn’t be a problem.

The premise of the scientist’s claim is that if 30 percent of the sunlight and other resources can be utilized in agricultural output, nobody would notice because they wouldn’t understand. Instead, most people would pay attention to the one mu of land that can produce 40,000 jin of grain, so in this context, Mao’s request wasn’t unreasonable. As a result, the CCP’s Great Leap Forward accelerated its implementation of the policy, and consequently, at least 30 million people died of starvation.

Qian wasn’t wrong, because his conclusions had many preconditions. What is wrong is the CCP’s political correctness. This is a big lesson learned at the cost of tens of millions of Chinese people’s lives. The U.S. green energy policymakers are also assuming a series of preconditions and the subsequent political manipulation doesn’t necessarily consider scientific issues, but mostly social and political issues.