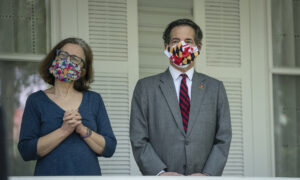 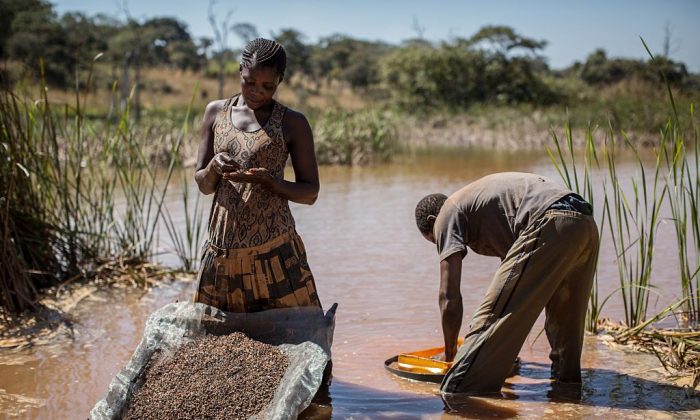 A woman and a man seperate cobalt from mud and rocks near a mine between Lubumbashi and Kolwezi, Democratic Republic of the Congo, on May 31, 2015. (Federico Scoppa/AFP/Getty Images)
Viewpoints

Green Energy Is a Waste of Human Life, Freedom, and the Environment

In the Democrats’ inane obsession to control the weather 80 years from now, to fight the totally nonexistential threat that is modest climate change, they’re pushing ever greater amounts of green energy technologies, which are built on human misery and literally mountains of toxic waste.

Asians and Africans, many of them children, are being enslaved and dying in mines, refineries, and factories to obtain the minerals and metals required for the green energy technologies Democrats are mandating. Yet, the politicians and their supporters don’t seem to care.

Amnesty International and numerous media outlets have conducted research and reported stories showing most of the cobalt required for the batteries needed for President Joe Biden’s big electric vehicle push comes from small mines in the Democratic Republic of Congo (DRC). Cobalt is a necessary metal in the rechargeable batteries that power almost every electronic device in the world today, including cellphones, laptop computers, tablets, electric vehicles, and the magnets used in wind turbines.

The DRC produces more than half of the cobalt used today—more than all the other countries in the world combined.

The government of the DRC has a terrible record of human rights abuses. Many of the workers in the country’s cobalt mines are enslaved or virtually enslaved children. UNICEF estimated more than 40,000 children work in mines in the DRC, where hundreds, if not thousands, die in cave-ins and other mine accidents and from mining-related illnesses every year. Most of this cobalt is produced for, or purchased by, Chinese conglomerates operating in the DRC. Often, the cobalt is shipped to China, where it’s refined and put into all manner of electronic gadgets from cell phones to fighter jet display systems.

And it’s not just batteries for electric cars and battery backup for solar and wind industrial facilities that are built on slavery and human misery. Research from Sheffield Hallam University in the United Kingdom reports that a single province in China produces 45 percent of the polysilicon that makes up solar panels, the majority of which are assembled in China. The polysilicon and solar panels are produced by Uyghur Muslims under a huge forced-labor regime.

“Solar panels are in huge demand because of climate change,” reports the BBC, discussing the study. “The global production of solar panels is using forced labour from China’s Uyghur Muslims in Xinjiang province. … The [polysilicon] is obtained under a massive system of coercion.”

Cobalt and polysilicon are just two of the myriad minerals, metals, and composites underpinning all modern electronics for which the world depends on China and other oppressive regimes. Unless the Biden-Harris administration, other U.S. Democratic Party leaders, and the heads of other developed countries change course, child and slave labor will become even more prevalent, because each and every green energy technology they’re pushing for depends on these minerals and elements.

Then there’s the huge waste problem being created by the push for green energy.

Huge amounts of earth must be mined to extract the sparsely spaced minerals and elements needed to create the batteries powering electric cars, as well as providing supplementary power when the wind isn’t blowing or the sun not shining. The refining of these minerals produces a toxic sludge that poisons adjacent and downstream peoples and environments.

Even more energy-intensive mining and manufacturing are necessary to create the composite materials of which wind turbine blades and towers are formed. Massive amounts of energy are used to create and transport the tens of thousands of tons of carbon dioxide-intensive concrete necessary to anchor each wind turbine. Vast amounts of land, most often prime view areas, wildlife habitat, and migratory corridors, are transformed into energy-producing industrial parks when wind “farms” and vast solar arrays are erected.

And the results are huge piles of toxic trash when batteries, wind turbines, and solar panels fail prematurely or simply cease working at the end of their anticipated useful lives, which are difficult to process, recycle, or dispose of. Because of the way they’re assembled and the materials they’re made with, lithium-ion batteries are difficult to recycle. Attempting to disassemble a battery for recycling can result in a short-circuit, explosion, and fire that releases toxic fumes.

Yet, absent recycling, the millions of electric vehicle batteries that manufacturers expect to produce over the next few decades will wind up in landfills, taking up huge amounts of space in conditions that can result in the release of toxins, including heavy metals.

Even before Biden began his big push to expand the use of electric vehicles and wind and solar industrial energy facilities, cities and states were already struggling to deal with the mounting waste from disabled wind turbines and solar panels.

Municipalities running certified landfills are increasingly rejecting wind turbine blades, even when they can charge double the amount per ton for accepting them, because they take up tremendous amounts of space, must be crushed at considerable expense, require hundreds of years to break down, and often release methane and volatile organic compounds into the environment. Nor can they be recycled, because they’re made of a composite of resin, fiberglass, and other materials.

The sheer waste of human lives, freedom, and resources for the left’s climate obsession is appalling. Exploiting the most vulnerable people and environments of the world in the vain hope of preventing a minuscule sea level rise and slightly warmer temperatures in the world 100 years from now is unwise and morally bankrupt.