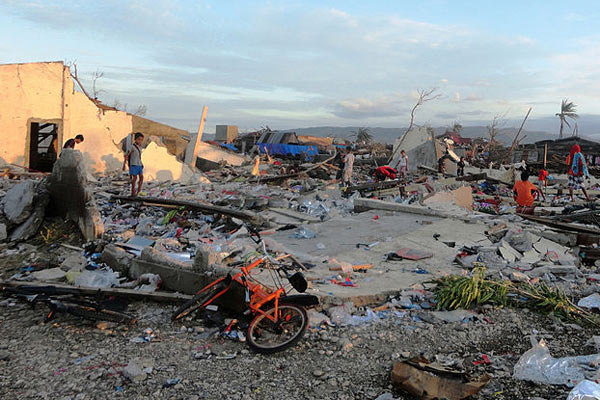 Homes destroyed by Typhoon Bopha in the Philippines in 2012. Rising sea levels are worsening storm surges of hurricanes. In addition, some research shows that global warming may be making hurricanes more powerful. Photo by: Rhett A. Butler.
Environment

Green Climate Fund Gets a Boost

The Green Climate Fund (GCF) is suddenly looking very lively after two announcements over the weekend. The U.S. has announced an initial pledge of $3 billion to the fund, while Japan pledged $1.5 billion. This more than doubles the current amount pledged to the key fund, which is now around $6.94 billion from thirteen countries. The new pledges also bring the fund much closer to an initial goal of $10-15 billion.

GCF was formalized in 2010 as a way to fund adaptations and mitigation efforts in poor countries, which are most at risk from climate change impacts while being the least responsible for our warming planet. It is seen by many as a key part of global negotiations on climate change, and a sticking point for a number of the world’s poorest countries.

U.S. President Barack Obama said the fund will allow developing nations to “leapfrog some of the dirty industries that powered our development [and] go straight to a clean energy economy that allows them to grow, create jobs, and at the same time reduce their carbon pollution.”

Early pledges to the fund have not just come from wealthy countries, but developing ones as well, such as Mexico which pledged $10 million.

“This gives us the opportunity to help vulnerable communities with an early warning system, with stronger defenses against storm surge, climate resilient infrastructure, it allows us to help farmers plant more durable crops, and it allows us to help developing countries break out of this false choice between development and pollution,” Obama said in Australia where he was attending a G20 meeting.

The pledges came just days after the U.S. and China announced a new deal to combat climate change. Under the new deal, the U.S. would reduce its greenhouse gas emissions by 26-28 percent by 2025, based on 2005 levels. Meanwhile, China says that its emissions will peak by 2030 or earlier if possible. It also promised to have 20 percent of its energy coming from zero carbon sources by 2030. While the pledges are not enough to stave off catastrophic climate change, they have been praised by many observers as a good starting point and a way to bring much-needed momentum into international climate negotiations. Nations have agreed on setting up a new international treaty at the end of 2015 in Paris.

A number of wealthier countries have yet to announce their pledges to the GCF, including Australia, Canada, Russia, and the UK. But, Tony Abbott, the Prime Minister of Australia says the country won’t pledge anything to the GCF.

Donations to the Green Climate Fund to date