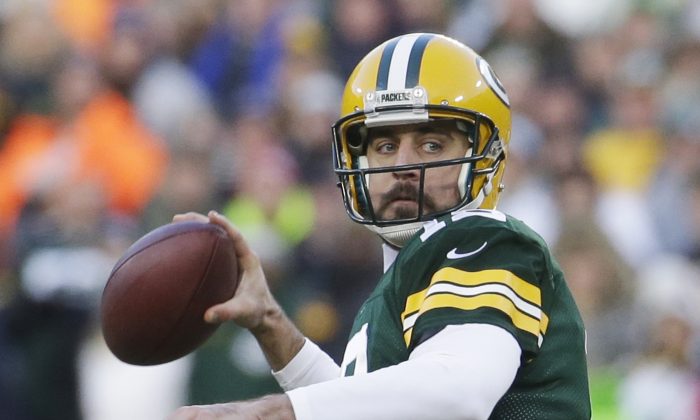 The Green Bay Packers play the Atlanta Falcons on Monday night. Here’s some of the latest buzz:

DE Julius Peppers said that he’s near the end of his career.

However, he wants to come back in 2015 with the Packers.

“Honestly, I’m taking this thing one day at a time,” Peppers added.

“And at the end of the year we’ll re-evaluate where I’m at where, where the team is at, which direction they’re going, which direction I want to go. So as of right now, I’m having fun, and I’m looking forward to tomorrow.”

Aaron Rodgers, whose played more than 100 games in his career, said that he wants another 100 more.

“I just turned 31 [on Tuesday]; I’m getting kind of old in this league here,” Rodgers told ESPN.

“A hundred starts, that’s kind of all it means. I’m not too excited either way about it. Hopefully get another hundred.”

His teammates say that he’s getting even better in his mastery of the offense.

“What he does every play for us now from an offensive standing point — [we] used to huddle every play to now we’re no-huddle every play, and he’s got full control over anything and everything he wants to check to, developing with his receivers, as a leader over the years stepping into that role — he’s the best player in the game,” receiver Jordy Nelson said. “I don’t know if you could say that seven years ago, but there’s no doubt about it now.”

Clay Matthews will face his cousin, Jake Matthews, during the Packers-Falcons game.

“It’s funny to study someone on paper and try and remember strengths and weakness, and it just so happens to be your cousin,” Clay Matthews said, according to Packers.com. “We’ll see how it goes. Should be fun, should be interesting. We’ll get some good sound bites, video clips, something to talk about later on.

“I’m sure I’ll reach out to him, see if he wants to give me any secrets about their offense.”

His cousin is a rookie left tackle. He’ll be lined up against Clay at times.

“We’ll see how it plays out,” said Clay. “I’ve heard stories of my father playing against my uncle and each one feeling bad for their respective victories, individually speaking, so that’s why I say it should be interesting. But ultimately, we’re going out here to get this win.”