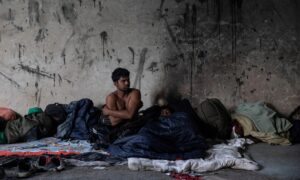 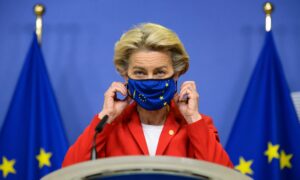 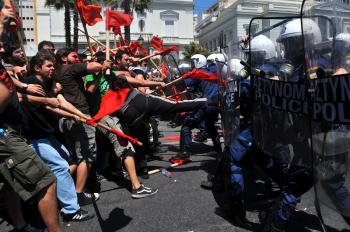 Demonstrators clash with police outside the Greek Parliament during a massive May Day demonstration to protest the austerity measures on May 1. (Louisa Gouliamaki/AFP/Getty Images)
Europe

By Kremena Krumova
Print
Harsh economic reforms agreed in exchange for Greece's financial bailout have caused a wave of anger throughout the country, with unions announcing a nationwide strike on Wednesday.

After 10 days of hectic negotiations, the eurozone members agreed on May 1 to give Greece a loan of $146.8 billion, with $106.7 billion of that being provided by the eurozone, and the rest by the IMF (International Monetary Fund).

According to the deal, Greece must make savings of $40 billion within the next three years to reduce the public deficit to below 3 percent.

Greek Prime Minister George Papandreou explained to the public he had little choice when negotiating the bailout package with the EU and the IMF.

“The alternative course would be a catastrophe and greater pain for all. Economic reality has forced us to make very harsh decisions,” the PM said to his ministers, in a televised emergency cabinet meeting—the first ever held on Sunday.

Papandreou said the deal was the only way to secure the country’s $400 billion debt and that the loan would give the country space and time to make changes. He warned of a big trial ahead, describing the public sector as “the big sick man.”

Papandreou said the measures will affect both public and private sectors with the package requiring new laws, which will make it easier for employers to lay off workers.

According to a research published on Friday, more than half of Greeks said they would go out to protest against further austerity measures. People regard the reforms as unfair and targeting the poor.

The envisaged reforms include lowering government expenditures by $10.1 billion, which will mean cutting extra salaries for public employees and pensioners, and contracting public investments and costs by $3 billion.

The deal also prescribes raising revenues by $10.4 billion. This will come from raising VAT from 21 to 23 percent (which is hoped to bring back $2.4 billion), increasing by 10 percent excise duties on fuel, alcohol, and cigarettes, and reforming the pension system, which will encompass extending the maximum work age to 65 years, and introducing 60 years as a minimum age for retirement.

According to AFP, the rescue package for Greece is the biggest sum given to a country in financial trouble in recent history in Europe. The final decision of the EU financial ministers will be taken at a summit of the eurozone on May 7 in Brussels. Greece has vowed to implement emergency legislation and put the reforms into force by next Friday.