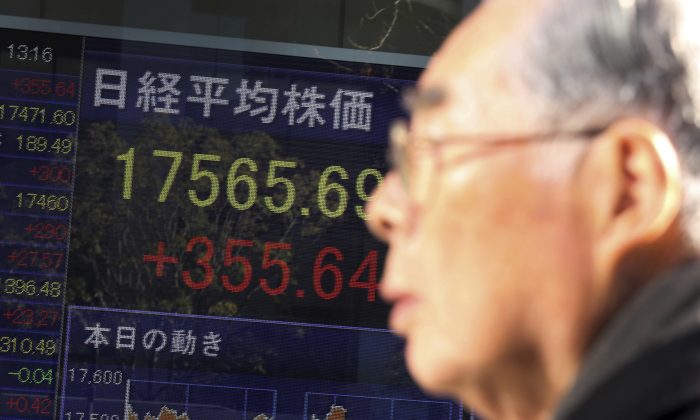 A pedestrian looks at an electronic stock board of a securities firm in Tokyo, Friday, Dec. 19, 2014. Asian stocks rallied for a second day Friday after the Federal Reserve's reassurance it was in no hurry to hike interest rates. But shares of Sony Corp. dropped as a hacking scandal rocked its American movies unit. (AP Photo/Eugene Hoshiko)
Business

Global stock markets drifted lower Tuesday as investors fretted over Greece and positioned themselves for a run of U.S. economic data that culminates at the end of the week with the closely watched nonfarm payrolls report for May.

GREEK IN FOCUS: A day after an emergency mini-summit of Greece’s international creditors, the country submitted a proposal it hopes will help break the logjam and secure a deal that will unlock desperately needed rescue money. Greek Prime Minister Alexis Tspiras said it was now up to the leaders of Europe, who are Greece’s main creditors, to accept a deal or risk potentially disastrous consequences for the region. For four months, Greece and its creditors have been locked in a standoff over what reforms the country needs to make to get more loans. Tsipras gave no specifics of what was included in the proposal included, which was submitted Monday night to the European Central Bank, International Monetary Fund and European Commission, the EU’s executive.

ANALYST TAKE: “There are some small signs of progress being made although that is doing little to settle the markets, with most European equity indices in the red,” said Craig Erlam, market analyst at OANDA.

EUROZONE INFLATION: While most of the focus has been on developments surrounding Greece, there was some interest in the news that consumer prices in the 19-country eurozone are rising for the first time since last November. Official figures Tuesday from the European Union’s statistics agency, Eurostat, showed that consumer prices across the single currency bloc were up 0.3 percent in May from the year before. That’s up from the flat reading in April and is the first positive reading since November. It’s also above market expectations for a more modest 0.2 percent rise and suggests the eurozone is past its bout of falling prices, which can become a long-term threat to growth. The inflation figures helped shore up the euro, which rose 1.2 percent to $1.1050.

US PAYROLLS LOOM: Another big focus this week will be the state of the U.S. economy. A slew of data ends Friday with May payroll figures. They can set the market tone for a week or two after their release, especially at a time when investors are trying to work out when the Federal Reserve will start raising interest rates. Recent figures have been mixed.

ENERGY: Benchmark U.S. crude was up 82 cents at $61.02 a barrel in electronic trading on the New York Mercantile Exchange. Brent crude, a benchmark for international oils, gained 55 cents to $65.43 a barrel in London.