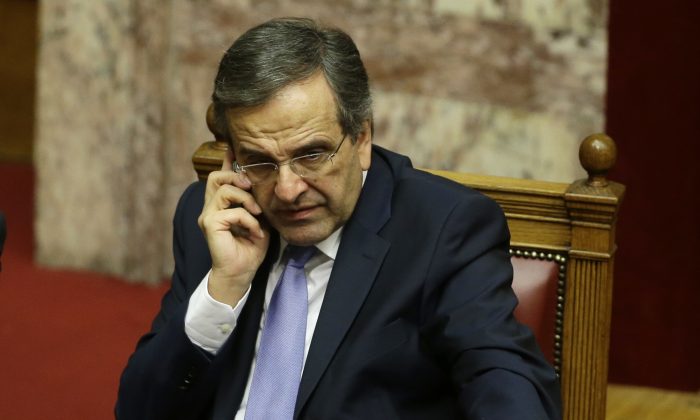 Greece's Prime Minister Antonis Samaras speaks on his cell phone after a parliament meeting for a vote on the country's 2015 budget in Athens on Dec. 8, 2014. In a televised address on Tuesday, Dec. 9, 2014, Samaras nominated Stavros Dimas, a senior figure in his conservative party and former EU commissioner for the environment, as the governments presidential candidate. Greek shares dived a day after the conservative-led government brought forward the date of a crucial presidential vote, raising a strong possibility of early general elections in the austerity-weary country. (AP Photo/Thanassis Stavrakis)
Business

ATHENS, Greece—The Greek stock market had its biggest plunge since 1987 Tuesday as concerns mounted that the country is heading for a political crisis that could jeopardize its financial rescue program.

The benchmark stock index in Athens dropped 12.8 percent after the conservative-led government brought forward the date of a presidential vote.

If the vote in Greece’s parliament is inconclusive, investors fear it could lead to general elections and a possible victory for an opposition party that wants to modify the bailout.

Investors also dumped Greek government bonds as they became more wary of the country’s ability to repay its debt.

The main left-wing opposition party, Syriza, which is leading in the polls, has said it will demand a substantial cut to what Greece owes in rescue loans if it is elected.

Megan Greene, chief economist at Manulife Asset Management, said that the country’s main creditors, the European Union and the International Monetary Fund, are not likely to go along with that. Greene said Syriza’s leader, Alexis Tsipras, would probably end up falling in line.

“The downside to that is that I think half his party will rebel as a result,” said Greene. That could lead to further political chaos and possibly another election, leaving the economy rudderless.

Greek government bonds took a hit Tuesday. The yield on the 10-year bond jumped 0.84 percentage point to 7.98 percent as investors demanded to be paid more to loan money to Greece.

Theodore Krintas, managing director of Attica Wealth Management, said that international investors, who account for up to 70 percent of daily transactions in the Greek market, opted to “just sell and get out.”

“I think this explains the magnitude, the extent that we see the losses of the Athens stock exchange today,” Krintas said.

Although Syriza has softened its rhetoric in the past, it hasn’t clarified whether it would resort to a default on the rescue loans. While that would lighten Greece’s debt burden, it could have other severe repercussions. It might, for example, spook international investors away from lending money to the country for years, hurting its ability to get back on its feet. Some suggested it could cause the country to fall out of the euro union.

Greece’s president is a figurehead with minimal political clout. But the election requires a super-majority that would include backing by some lawmakers from the overall hostile opposition, which appears beyond the reach of the struggling governing coalition. If three successive votes, from Dec. 17-29, prove fruitless, general elections must be called by early February, nearly a year and a half ahead of schedule.

In a televised address Tuesday, Prime Minister Antonis Samaras nominated Stavros Dimas, a senior figure in his conservative party and former EU commissioner for the environment, as the government’s presidential candidate.

Opposition parties said they would not back him, or any candidate the government puts forth, to force national elections.

Syriza’s Tsipras said the final presidential vote, on Dec. 29, would signify the end of the governing coalition’s “catastrophic” austerity policies.

“At last, this year we will have every reason to wish a Happy New Year,” he said.

The bulk of Greece’s 240 billion euros ($294 billion) in loans, those from the EU, run out this year. The last batch has still not been paid, however, as Greece and the EU disagree on whether Athens should impose more austerity cuts to qualify.

European finance ministers on Monday gave Greece a two-month extension on the bailout so they can complete the talks. Just after that, the Greek government said it was bringing forward the date of the presidential vote by about two months to strengthen its negotiating position and avoid protracted uncertainty.

Analyst Holger Schmieding at Berenberg Bank said that since the financial crisis, the eurozone is much better equipped to handle a Greek “accident.” It has a bailout fund and the European Central Bank has committed to buy the bonds of troubled countries, if needed. That could help keep the trouble in Greece from hurting confidence in other countries.

Schmieding argued that nobody knows what Syriza would do in power. “Would they really implement their wild proposals and go down in history as the party that killed the incipient recovery and crashed Greece out of the euro?” he said. “That uncertainty would weigh heavily on markets.”

From The Associated Press. David McHugh in Frankfurt, Germany, contributed to this report.