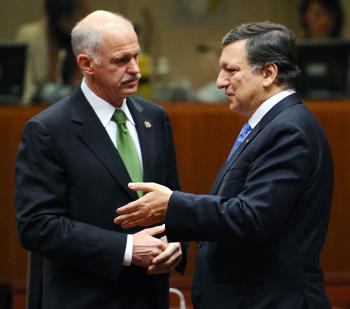 The country’s deficit is expected to be 12.7 percent of its GDP, the largest in the European Union. The Greek government says it is attempting to lower it to 9 percent before the end of the year.

Papandreou said that he would do “whatever is necessary to check the huge deficit, to restore stability in public finances, to promote development,” on the Web site of Papandreou’s political party Panhellenic Socialist Movement.

The meeting Papandreou called for, which will include leaders of all political parties, is to “conclude together against the corruption, in favor of transparency and the right function of the society,” he said.

Papandreou emphasized in the European Summit meeting in Brussels that, “We are not like Ireland or Dubai. Our problem is different. Our economic problems arise due to corruption, lack of transparency, evasion, not paying fees, and waste.”