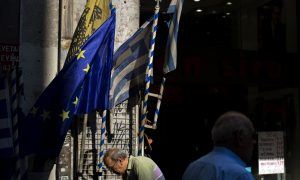 ATHENS, Greece—In a bid to consolidate his political support and complete a crucial bailout with creditors, Greek Prime Minister Alexis Tsipras on Thursday called for a vote within his party to decisively sideline rebels opposed to the rescue deal.

The radical-left Syriza party members would be asked in the vote, slated for Sunday, whether they accept his plans to reach a deal on a package of loans from creditors in exchange for more tax increases and budget savings.

Tsipras is gambling that with a win, he would neutralize the rebel party members, a group who contend the terms are too painful and that Greece would be better off leaving the euro.

The rebels’ constant opposition threatens to splinter the party and government and has raised the possibility of fresh elections in the autumn — which would create new uncertainty just as the country tries to get its economy back on its feet.

Addressing the party’s 200-strong decision-making body, Tsipras likened the vote to putting “the pin back in the hand grenade.”

“We have to agree that we can’t go on this way,” Tsipras said, adding that “the absurdity of this peculiar and unprecedented dualism” within the party must stop.

The vote could precede an extraordinary party congress in September, when the Greek government hopes to have concluded the rescue agreement, strengthening Tsipras’ hold on power.

In two successive votes in parliament this month, nearly a fourth of Syriza’s lawmakers refused to support new austerity measures demanded by creditors before a third bailout deal worth an estimated 85 billion euros ($93.12 billion) can be sealed.

Far-left dissenters argue Syriza has abandoned its principles over the past six months under the country’s popular prime minister. They have openly voiced support for Greece to turn its back on the euro as its national currency.

Panagiotis Lafazanis, recently fired as energy minister in a reshuffle, called for Greece to return to a national currency.

“An exit from the euro … in spite of all the dark propaganda, would in no way be a disaster,” Lafazanis told supporters in Athens this week.

An exit from the euro … in spite of all the dark propaganda, would in no way be a disaster.
— Panagiotis Lafazanis

Tsipras rose to power in January on a strong anti-austerity platform amid a public backlash against fire years of harsh tax hikes and wage cuts. He formed a government with the smaller, right wing party Independent Greeks which agreed with his anti-austerity policies.

But after months of fruitless talks with creditors, the 40-year-old Syriza leader was forced to accept another batch of austerity measures during a summit of eurozone leaders earlier this month amid fears that the country would be kicked out of the common currency.

Tsipras insisted that he managed to win softer terms and clinch a pledge from other leaders to discuss ways of easing Greece’s massive debt.

Government spokeswoman Olga Gerovasili said “differing strategies” within the party over Greece staying in the euro cannot be reconciled.

She said it’s up to members whether they’ll join with the party’s majority or “follow a different path.”

Opposition parties are propping up Tsipras’ coalition government long enough to negotiate a new bailout and keep the country in the eurozone.

Lead bailout negotiators are due in Athens later Thursday. They will intensify a new round of talks for a massive third rescue package after Athens and lenders from other eurozone countries reached a bitterly fought compromise.

Before Thursday’s party executive meeting, Tsipras acknowledged that Syriza was still adapting to becoming a party of government.

“We must admit that Syriza has not become a unified party,” he said in a two-hour radio interview Wednesday.

“It’s been described as a violent maturing process: Syriza went from a party that received 4 percent (in past elections) to one that now carries the hopes of the majority of the Greek people.”

Tsipras, despite the looming hardship for Greeks, has increased Syriza’s lead in opinion polls since the January general election.

Dimitri A. Sotiropoulos, an associate professor of political science at the University of Athens, says that at the moment a party split still looks unlikely.

“Being in power has a binding effect … and (dissenters) will not want to be held responsible for a break up,” he said, before adding: “But ideology and emotion remain strong forces in Greek politics. And that can lead to the wrong decisions.”