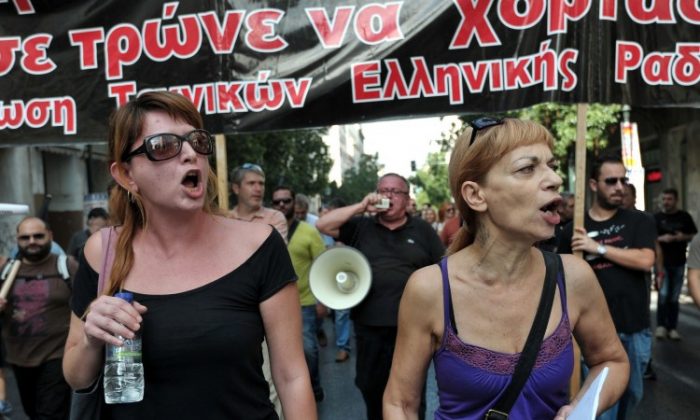 Journalists shout as they march in central Athens during a 24-hour strike on Oct. 17. (Louisa Gouliamaki/AFP/Getty Images)
Europe

The Greek investigative journalist and publisher of Hot Doc magazine, Costas Vaxevanis, will stand trial on charges of violating private data laws. On Oct. 20, he published a list of approximately 2,000 names of wealthy Greeks who are said to have had accounts with bank in Geneva, Switzerland.

Vaxevanis denied breaking the law in a video he taped while at a friend’s house prior to his arrest.

“There is only the publishing of names related to bank accounts, and we never stated if they do or do not have money in them,” said Vaxevanis. “Our transactions are made publicly on the bank’s counter, and having a bank account is not personal information.”

Hot Doc explicitly stated that the people in the list should not be declared tax evaders unless this is proven. However, the magazine noted that the money in many of the accounts did not add up when compared to the incomes of the holders. After the publication, most of the bank accounts were closed.

Vaxevanis said the ones who should be held responsible are none other than the former finance minister Evangelos Venizoulos and his predecessor George Papaconstantinou, who he says had this information and did not act on it to potentially recover tax income for the struggling nation.

A crowd gathered in front of the building where the journalist was held. Among the supporters were members of the Greek parliament, human rights defenders, and lawyers.

Independent MP Nikos Nikopoulos is quoted by the Greek website GR Reporter: “In Greece, the law applies to those who reveal lists of bank accounts. At the same time, however, those who are keeping ‘forgotten’ lists in their desks, and do not publicize them, are left undisturbed.” s

Dimitris Trimis, president of the Journalists Union of Athens Daily Newspapers, described the prosecution’s actions against the journalistic investigation as “absolutely hypocritical”, according to GR Reporter.

Vaxevanis said he received the file on a USB memory stick from someone who wrote to Hot Doc.

Media reports disclose that some of the accounts contained up to $650 million (about 500 million euros), while the total amount of money in the accounts reached $1.95 billion.

According to Hot Doc, the names in the list belong to the “Lagarde list,” handed over to the Greek authorities in 2010 by the then French finance minister and now head of the International Monetary Fund, Christine Lagarde, for possible tax evasion probing.

Former minister Giorgos Voulgarakis called his inclusion in the list as “disinformation” and “mudslinging” and Tweeted that, “Neither my wife nor I have any offshore companies or foreign bank accounts,” the Greek daily Kathimerini reported.

Last week, Greece negotiated a prolonged period for implementing the austerity program, which aims to cut $17.5 billion of expenditures, as part of a bailout scheme with the European Union and the International Monetary Fund—the creditors of Greece. But plans are yet to be finalized.